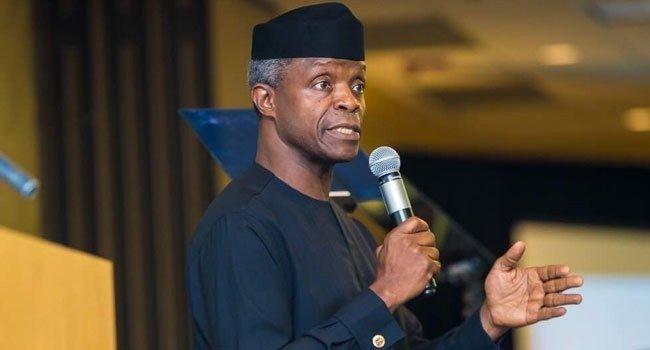 The corruption scandal engulfing the suspended Chief Justice of Nigeria, Walter Onnoghen, deepened dramatically on Wednesday with fresh evidence against the CJN.

As the National Judicial Council takes on the matter of the suspended Chief Justice of Nigeria, a more robust legal consensus may be in the offing judging by indications that Vice President Yemi Osinbajo is leading efforts to ensure a more diligent adherence to the rule of law, regarding the case.

Just as the NJC started its review on the controversial issue, concerned lawyers in and out of government are said to be developing different road maps and scenarios on how to end the unprecedented crisis of confidence now rocking the judiciary. Even a controversial call for boycott of the courts by the Bar association over the matter has not gained any significant traction.

Leading that charge, a highly placed official familiar with the matter said the Vice President who had initially counseled that the case against the CJN be handled properly including by allowing the National Judicial Council be in the know and play the lead role, an idea that is now taking the fore with the Council’s meeting on Tuesday.

Some Observers say the absence of VP Osinbajo at the swearing in of the Acting CJN may reflect a rather sudden turn of events from efforts within government to more diligently manage the crisis.

Sources say while every one who has taken a look at the case against Justice Walter Onnoghen have come to the conclusion that he has a big case to answer, some continue to make a big deal of the process that led to his suspension.

But the alarming amount of fresh evidence emerging against the embattled CJN continue to dilute the technical claims about the process. However this is now creating space for a face-saving legal way to resolve the issue without much of the political posturings, according to informed sources.

Insiders say it took the compliance of the President with the Code of Conduct Tribunal order directing the suspension of the CJN last week to force the meeting of the NJC where the CJN and the Acting CJN were queried. Before that the NJC meeting to review the matter had been stalled.

It is believed that the preponderance of evidence against the CJN had emboldened those in government who felt the removal ought to take place quickly, especially because there were also credible concerns that the Chief Justice have become significantly compromised even along partisan lines.

A source said while the VP was making headway on ensuring a more robust approach, fresh evidence including potential money laundering charges emerged and this fueled the decision to promptly suspend the CJN, especially when he had refused to step aside, preferring instead to fight it out politically especially with the support of a number of some well-known Senior Advocates.

Pro-Onnoghen legal minds are arguing that the President can not suspend the CJN and that the matter was already in a higher court – Court of Appeal- which had ordered a Stay of Action. There are also arguments that the swearing in of Justice Tanko Mohammed in the circumstances was not backed by law, an issue raised at the NJC meeting on Tuesday where the Council queried the Acting CJN for making himself available for swearing in without the involvement of the Council.

It is however the moral suasion that drives the substance of the matter harder: a CJN deemed a multi-millionaire going by the revelations that have now emerged from his declarations and new ones coming forth from subsequent investigation including what the President said were millions of dollars found in the CJN accounts.

The CJN had himself owned up to forgetting to fully declare his assets, making the Prima Facie case against him even more persuasive in the public discourse, said a government official under the condition of anonymity.  Besides the rather unpalatable refusal of the CJN to step aside and his sudden cancellation of the NJC meeting

According to another source, while the case against the CJN is strong, senior lawyers in the cabinet led by the VP have always counseled that it ought to be handled carefully to ensure that the prosecution is orderly and in line with extant laws, especially a subsisting Court of Appeal ruling that the NJC has to be involved first.

But those who argued against that noted that the ruling of the Court of Appeal is only in regards to suspected criminal conduct in the course of a judge’s judicial conduct, not matters of asset declaration which is a general public service requirement not specific to judicial conduct.

BuhariOnnoghenYemi Osinbajo
Share
Subscribe to our newsletter
Sign up here to get the latest news, updates and special offers delivered directly to your inbox.
You can unsubscribe at any time

‘I am not corrupt’: Buhari insists, tells Nigerians to vote for him

Overland Airways, with 6-airplane fleet, flies one of the oldest planes in Nigeria…