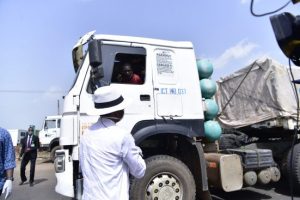 Kaduna State Government on Monday directed that all roadblocks at the various boundaries of the state be dismantled and replaced by barricades that enforced the ban on interstate travel.

A statement issued by Governor Nasir El-Rufai’s Special Adviser on Media and Communication, Muyiwa Adekeye also directed that all boundary patrols undertaken by state government officials as part of the quarantine regulations be stopped forthwith.

It said the decision which was based on the recommendation of the State Taskforce on Covid-19 that following a review of the situation in the state boundaries had directed that henceforth, the only roadblocks authorised within the state are those that are mounted to enforce the 8pm-5am curfew.

It said the state government had received reports of persistent extortion of vehicles conveying essential goods by some security officials, thus complicating an already challenging period.

K“While non-essential travel has been wantonly indulged at the state boundaries, there are reports of continued extortion by some security agents of vehicles transporting essentials goods,” it stated.

“Clearly, the prohibition of interstate travel by the Federal Government as part of Covid-19 containment efforts has largely been observed in the breach by the people charged with enforcing it,” it further stated.

The statement explained that the ban on interstate travel has been consistently implemented only when state government officials have been deployed to the entry points, stressing that, “officials on boundary duty consistently reported at best lacklustre or perfunctory cooperation by security agencies in enforcing the interstate travel ban.”

Per Second News report in April had captured how security agents helped commuters sneak in and out of Kaduna while an interstate travel ban was in force but the Kaduna State Police Command had then stated that it was not aware of such illegalities and warned that any officer caught will be dealt with appropriately.

AbujaCOVID-19GovernorsKaduna
Share
Subscribe to our newsletter
Sign up here to get the latest news, updates and special offers delivered directly to your inbox.
You can unsubscribe at any time