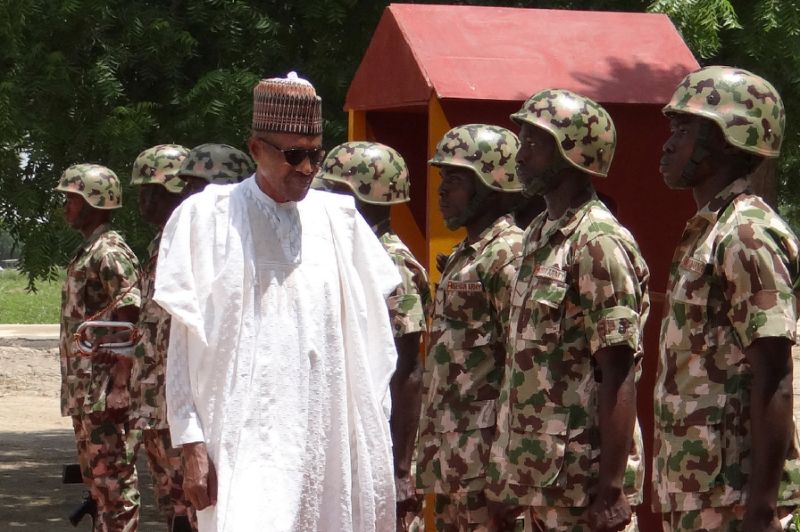 President Muhammadu Buhari is set to visit troops on the frontlines of the Boko Haram war on Wednesday in a visit many in Nigeria believe will boost morale of the Soldiers.

The presidential visit comes after months of deadly raids by the IS-affiliated jihadists on military bases which have left scores of troops dead or missing in the volatile northeast.

AFP has reported at least 17 attempts to overrun army bases since July.

Many of the attacks have been claimed by the Islamic State West Africa Province (ISWAP), a faction of Boko Haram.

The massacre of dozens of Nigerian Soldiers by rogue Boko Haram militants triggered angry calls for the government to invest in modern war technology to solve the readiness crisis facing the military.

” Unless we change course, our military is at a high risk of not being able to fully guarantee our national security,said Nkem Okoye, a security expert.

Speaking with Per Second News last week, a weapons expert said ” the men and women who serve in the Nigerian Military are one of the best in the continent. They serve with courage and commitment, wherever and whenever they are called.

” But the government cannot continue to task its armed forces with deterring threats to our national security without equipping them with the capabilities they need to effectively manage and defuse those threats.

” Preparedness and deterrence cost less and save lives, he said.

Buhari has repeatedly said that the services of the men and women in Military are absolutely necessary, absolutely essential to Nigeria’s safety and security, and promised to improve the living conditions of the force by making available the tools they need to win the war against terror.

Buhari set to visit troops fighting Boko Haram in Borno front lineMuhammadu Buhari
Share
Subscribe to our newsletter
Sign up here to get the latest news, updates and special offers delivered directly to your inbox.
You can unsubscribe at any time

Iya Kabiru and Other Stories by Reuben Abati

Subscribe to our newsletter
Sign up here to get the latest news, updates and special offers delivered directly to your inbox.
You can unsubscribe at any time
More Stories
Archive