Only Our Friends Will Get Our Dollars – Trump At The UN, Says ‘America First’ 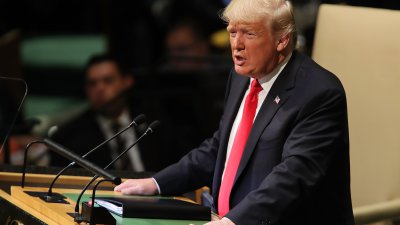 President Trump defended his “America First” agenda in a speech to the United Nations General Assembly on Tuesday, saying only genuine friends of America will get aids from the United States henceforth.

“The United States is a stronger, safer, and richer country than it was when I assumed office less than two years ago,” Trump declared. “We are standing up for America and the American people and we are also standing up for the world.”

This is great news for our citizens and for peace loving people everywhere,” he continued.

President Trump said the US is “taking a hard look” at the foreign aid it sends to other countries and the financial support it provides to international organizations.

“Few give anything to us. That is why we are taking a hard look at US foreign assistance. We will examine what is working, what is not working and whether the countries who receive our dollars and our protection also have our interests at heart,” Trump said. “Moving forward we are only going to give foreign aid to those who respect us and frankly our — our friends. And we expect other countries to pay their fair share for the cost of their defense.”

Promising to make the UN “more effective and accountable,” Trump also vowed to change how the US funds the international body’s various programs and where US dollars are spent.

“Only when each of us does our part and contributes our share can we realize the UN’s highest aspirations,” Trump said.

He rattled off his administration’s achievements and defended decisions that some in the international community have rebuked.

Nikki Haley, the U.S. ambassador to the U.N., shared some insight into Trump’s address earlier.

“He wants to talk about protecting U.S. sovereignty, foreign aid and how generous the U.S. is but also will lay down a marker that we’ll be generous [to other nations] that share our values and want to work with us — not those that say they hate the U.S.,” she said.

Buhari Could Lose the 2019 Election, Says US Intelligence Firm

Subscribe to our newsletter
Sign up here to get the latest news, updates and special offers delivered directly to your inbox.
You can unsubscribe at any time
More Stories
Archive