Power Over Budget: Court Rule In Favour Of NASS 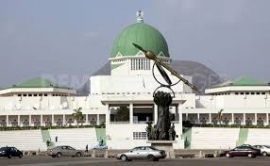 …Says legislature has powers to tamper with budget estimates

By Amos Dunia, Persecond News, Abuja – The controversy over powers and or limits of the National Assembly to alter, review, increase or reduce the Appropriation Bill was unknown to the public laid to rest on March 09, 2016 by a Federal High Court, Abuja presided by Justice Gabriel Kolawole.

Acting President Yemi Osibanjo last week complained over the insertion of some projects that were not contained in the 2017 Appropriation Bill laid before the National Assembly by President Muhammadu Buhari in December 2016.

And in quick response, the two chambers of the National Assembly fired back saying they derived their powers from the provisions of the 1999 constitution of the Federal republic of Nigeria as amended.

While the debate over the powers or otherwise of the National Assembly started generating controversy in the media and public fora, a ruling of a Federal High Court that was delivered on March 9, 2016 over the matter surfaced thereby putting a seal to the needless controversy.

This followed ruling premised on a suit number FHC/ABJ/CS/259/2014 instituted in 2014, by Mr. Femi Falana SAN, before Justice Kolawole of the Federal High Court in which the court ruled that the National Assembly does not exit to rubberstamp the Presidency thus has powers to increase, add, reduce and review budget estimates laid before it by the executive.

# By Section 81 of the Constitution, the National Assembly can increase or review upward any aspect of the estimates of the revenues and expenditure of the Federation for the next financial year prepared and laid before it by the Executive;

# By Section 85 of the Constitution, the National Assembly can audit public accounts of the Federation, appoint auditors for statutory bodies or conduct periodic checks of all government statutory corporations, commissions, authorities, agencies, including all persons and bodies established by an Act of the National Assembly in any manner whatsoever and howsoever;

# By virtue of sections 88 and 89 of the Constitution, the National Assembly can summon corporate bodies and private individuals while conducting an investigation into any matter, and;

# By virtue of section 214 of the Constitution, NASS can probe or investigate the allegations of corrupt practices, fraud, murder and other criminal offences committed in statutory corporations, commissions, authorities, agencies, including all persons and bodies established by an Act of the National Assembly in any matter howsoever.

Falana also prayed the court to declare unequivocally that by virtue of the stated sections, the legislative arm cannot increase budget estimates, or audit accounts of the Federation (or appoint auditors to do same), summon corporate bodies and private individuals while conducting an investigation into any matter, or probe/investigate allegations of corruption, fraud, murder and other criminal offenses committed by public officers, corporate bodies and individuals in Nigeria.

The Human Rights lawyer also sought an order of perpetual injunction restraining the Parliament from increasing budget estimates laid before it by the Executive, auditing or appointing auditors to audit accounts of statutory bodies and public accounts of the federation or from conducting periodic checks of the accounts of government statutory corporations, commissions, authorities, agencies, including all persons and bodies established by an Act of the National Assembly, and restraining NASS from probing or investigating allegations of corruption, murder and other criminal offenses committed by public officers, corporate bodies and individuals in Nigeria.

But in his ruling which was delivered on 9th March 2016, and a certified copy of the judgment obtained by Persecond  News, Justice Kolawole, noted that the questions as posed by Falana’s counsel, bordered on interpretations of the specific provisions of the Constitution which relate to the exercise of the National Assembly’s constitutional legislative powers, adding that the essence of the suit was that the National Assembly, under the guise of exercising oversight functions, usurps executive powers; an assertion the trial judge nullified.

The trial Judge therefore ruled that the Nigerian Constitution, which is modeled largely after that of the United States, has “as its underpinning principle, the constitutional doctrine of separation of powers”, and that sections 4, 5 and 6 of the Constitution clearly state that the machinery of the government of the federation at both federal and state levels, is predicated on three equal and coordinate arms of government, i.e. legislature, judiciary and executive.

Justice Kolawole observed that the drafting of the Constitution makes cooperation between all the arms compulsory, stressing that as, by design, none can operate by standing aloof of the others, and this gives rise to the need for checks and balances, which would help prevent dictatorship, adding that certain powers by an arm of government are subjected to review or ratification by another.

He also noted that the whole purpose of sections 81, 85, 88 and 89 is to ensure that Executive and agencies under its control are subjected to some form of oversight by Parliament, and that since the National Assembly is constitutionally empowered to appropriate funds to be expended for the running of government, it therefore has powers of oversight to ensure those appropriated funds are properly administered.

Justice Kolawole declared; “The legislature and the executive are subject to the interpretative jurisdiction of the Court as to the constitutionality or otherwise of the exercise of their respective powers. The fact is that it is the Judiciary which has the constitutional responsibility of preventing both arms of government from committing infractions of provisions of the Constitution.

Addressing questions put to the court by Falana, the Court declared thus; “the National Assembly was not created by drafters of the Constitution and imbued with the powers to receive ‘budget estimates’ which the first defendant is constitutionally empowered to prepare and lay before it, as a rubber stamp parliament.

Addressing the question with regards to the powers of the National Assembly to audit public accounts or appoint auditors, Justice Kolawole had said that while the Constitution does not explicitly grant this power, “in so far as that duty is vested in the Auditor-General (AGF), of the Federation, Parliament still retains legislative oversight powers over the AGF even in respect of these matters.”

On whether legislators can summon private citizens, Justice Kolawole ruled that “when Parliament exercises powers to summon private corporate bodies in contrast to public bodies, or where it summons a private citizen, the inquiry it is going to conduct must be such that it is within legislative competence”, i.e. relating to matters contained in the Exclusive Legislative List, on which Parliament can legislate and/or amend existing laws.

Similarly, while commenting on investigative powers, the court further ruled that Parliament can, via resolutions, “direct agencies of government to conduct investigations, and where this is done in the legitimate and bona fide exercise of its constitutional legislative powers, to turn its reports to such agencies to aid them in their own investigations with a view, not to merely expose corruption, but to prosecute those found culpable.”

Significantly, all the seven reliefs sought by Falana SAN, against the National Assembly were not granted by the court.

Justice Kolawole also ruled; “No Court of law created and established pursuant to the provisions of the Constitution, 1999 as amended, in the legitimate exercise of its undoubted jurisdiction as the guardian of the Constitution and on the basis of the doctrine of separation of powers enshrined in the Constitution, can prospectively grant the restraining orders sought by the plaintiff (Falana) against the 3rd Defendant (the National Assembly) as the Legislative Arm of the Government of the Federation.”