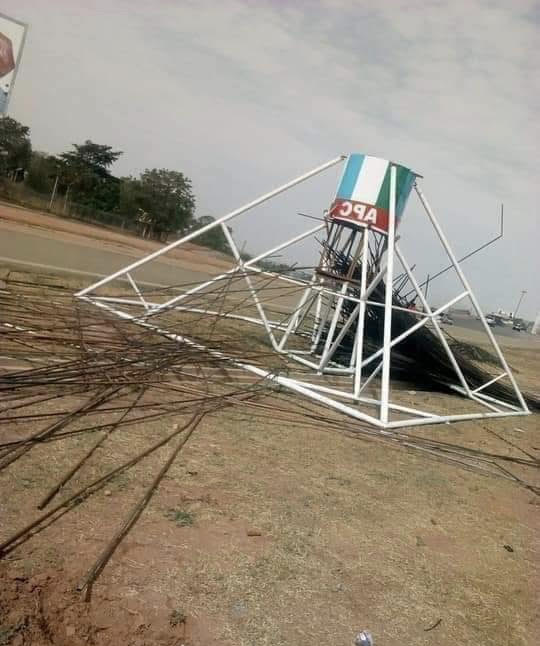 Share
The giant All Progressives Congress (APC) giant broom, which generated a lot of controversies when it was erected at the entrance of the Abuja City gate, has been pulled down.
This may be connected to the fact that it is because campaigns and elections are over.
In an exclusive interview with PerSecond News, an eye witness who spoke on anonymity said he saw two men drive in a car yesterday to the city gate to pull it down.
Don't Miss

Nov 29, 2022
“I saw two men drive to the city gate in the evening yesterday. They alighted from the vehicle and brought out some tools. Just as I was wondering what they wanted to do, they began to pull down giant broom.
“I feel because campaigns and elections are over, there is no use for the broom, that is why they removed it,” he narrated.

However, so many Nigerians have taken to their Twitter handles to react to broom being dismantled.
A Twitter user with handle @QdPaper wrote, “So 240 million Naira wasted. APC cannot maintain their giant broom, how will they manage Nigeria.”
Another user @Abdulqahar_AQ wrote: “May APC go down the way this giant but useless broom went down in Abuja.
Amen

AbujaAPC Broom
Share
Subscribe to our newsletter
Sign up here to get the latest news, updates and special offers delivered directly to your inbox.
You can unsubscribe at any time