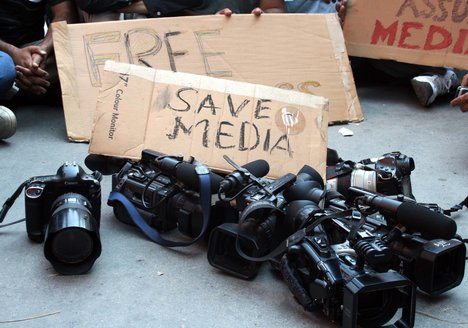 Socio-Economic Rights and Accountability Project (SERAP) has dragged the Federal Government and state governments to ECOWAS Court of Justice in Abuja over “the frequent and repressive application of the Cybercrime Act to harass, intimidate, arbitrarily arrest, detain, and unfairly prosecute anyone found publishing views or facts perceived to be critical of the government at the federal and state levels and government officials.”

In the suit number ECW/CCJ/APP/09/19 filed last week at the ECOWAS Court, SERAP is arguing that: “The Federal Government and several state governments and their agents have trampled on the rights to freedom of expression and information of bloggers, journalists, activists, and social media users through the repressive use and implementation of the vaguely worded provisions of the Cybercrime Act.”

The suit filed on SERAP’s behalf by its Solicitor Femi Falana, SAN states: “The fundamental question for the court is whether the federal and state governments, by using and applying the Cybercrime Act and other similar laws on cyberstalking and sedition to prosecute journalists, bloggers and activists over perceived critical views, violate the rights to freedom of expression and access to information. SERAP submits that, under international freedom of expression jurisprudence, the answer is YES.”

The suit read in part: “The idea of a democracy is that the people are encouraged to express their criticisms, even their wrong-headed criticisms, of elected government officials, in the expectation that this process will improve the process of government. In circumstances of public debate concerning public figures in the political domain and public institutions, the value placed by legal principles and jurisprudence upon uninhibited expression is particularly high.”

“The systematic and persistent use of the Cybercrime Act and other similar laws on alleged cyberstalking to prosecute and imprison journalists, bloggers and activists for their criticism of public officials runs afoul of freedom of expression principles, namely: that criminal prosecutions against journalists and bloggers is never an appropriate remedy for alleged defamation of government officials, and that  news reporting about government officials are matters of public interest, which should be accorded heightened protection.”

“Sanctions for defamation should not be so large as to exert a chilling effect on freedom of opinion, expression and media freedom; penal sanctions, in particular imprisonment, should never be applied. This implies a free press and other media able to comment on public issues without censorship or restraint and to inform public opinion. The public also has a corresponding right to receive output.”

“Section 24 of the Cybercrime Act which provides for the offence of cyberstalking has been severally used and applied by the Defendant and its agents and several state governments across the country in molesting, intimidating, harassing and witch-hunting anyone found publishing views or facts deemed critical of government and/or government officials.”

“The vaguely worded offence of cyberstalking as stated in the Cybercrime Act is accorded a wide interpretation that extends to factual and true reports by activists, journalists, social media users and bloggers, thereby leaving a chilling effect on the rights to freedom of expression and information and media freedom and on citizens’ participation in the fight against corruption.”

“The abusive and repressive use of the vaguely worded provisions of the Cybercrime Act to stifle and muzzle perceived critics, journalists, bloggers and other media practitioners is an affront and it is dangerous to the rule of law and protection of the human rights of people.”

“Stories published online have been deemed ‘offensive’, ‘obstructive’, ‘insulting’ or ‘annoying’ with actionable consequence under section 24 of the Act even when the stories are true, correct and factual. Some stories published through traditional media outlets (print and electronic) that were never sanctioned by the government have been sanctioned by the same government upon being republished through online platforms.”

“SERAP chronologically highlights in this suit some of the high-profile cases of harassment, intimidation, arrest, unlawful detention, prosecution and imprisonment of journalists, bloggers, and activists for alleged cyberstalking.”

SERAP is seeking the following reliefs:

1.A DECLARATION that the actions of the Defendants and its agents and several states of Nigeria in arbitrarily enforcing the provisions of the Cybercrime (Prohibition, Prevention, etc) Act 2015 particularly its section 24 to harass, intimidate, arrest, detain, prosecute and imprison journalists, bloggers, and social media users, violate the rights to freedom of expression, information, opinion and privacy and media freedom, guaranteed under Articles 6,8,9 and 24 of the African Charter on Human and Peoples’ Rights; Articles 7,9,17 and 19 of the International Covenant on Civil and Political Rights to which Nigeria is a state party

FGJournalistsNigeria
Share
Subscribe to our newsletter
Sign up here to get the latest news, updates and special offers delivered directly to your inbox.
You can unsubscribe at any time

Uzodinma tasks Nigerian youths on diversification of the national economy