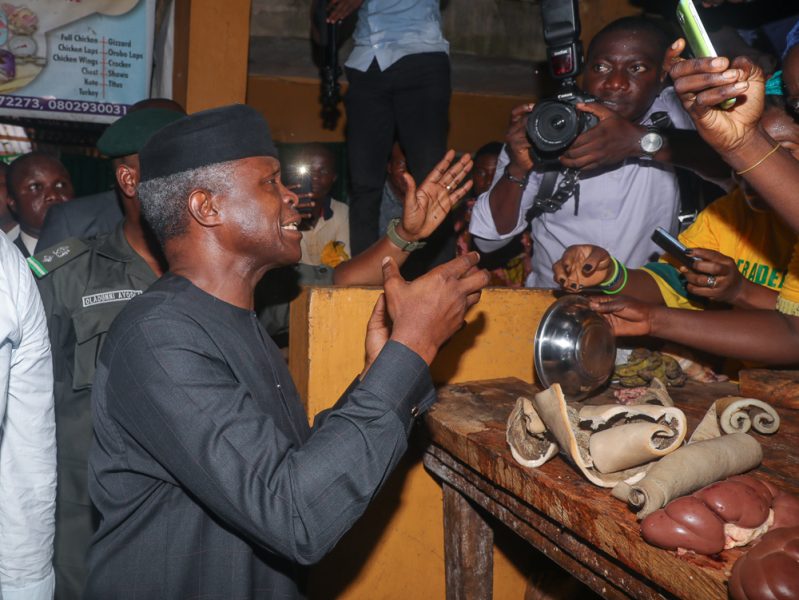 The People’s Democratic Party (PDP) has settled on a strategy of fear — laced with falsehoods, envy and tinged rhetoric, said the Initiative to Save Democracy (ISU) on Sunday.

The group said the opposition PDP’s campaign strategy for the 2019 elections isn’t working and reason the party is envious of Prof Yemi Osinbajo’s door-to-door U.S-style campaign.

” Fayose and PDP are pained because no member of their party can successfully copy Prof Osinbajo, said James Sunday Akinloye, President of the group.

“The PDP is a party that is reputed for lack of knowledge, all they know is rofo-rofo (dirty fight) because they lack any meaningful content, no ideas, no philosophy, meanwhile Nigerians have stepped up their game in terms of voter enlightenment.

“In 2014, Prof Osinbajo pioneered people-oriented campaign by engaging with everyday Nigerians in public buses and at shopping malls.

“Let me refresh the dwindling memory of Fayose and his ilk. Prof Osinbajo joined the Lagos State Bus Rapid Transport bus from Tafawa Balewa Square from Lagos Island to Barracks, in Surulere, during which he interacted with the passengers, selling the APC agenda and why the party would make a difference in Nigeria.

“He also visited the Palms Mall in Lekki, where he also interacted with Nigerians and has not stopped connecting with Nigerians ever since this government was elected into office.

“Matured campaign styles are needed, that is the only way you know issue and idea-based campaigns. Fayose and the PDP are only used to people insulting themselves but that is not what Prof Osinbajo or APC stand for.

“Prof Osinbajo is seeking new ways to improve direct communication between those in government and the generality of Nigerians who deserve better than what the PDP can ever hope to offer.

Akinloye said the campaign style worked in 2014 and will work again in 2019 because Nigerians know fully well that President Muhammadu Buhari and Prof Osinbajo have their best interests at heart.

Akinloye said the door-to-door campaign style embarked upon by Osinbajo and the ruling All Progressives Congress (APC) is beyond the comprehension of persons like Fayose and his ilk.

He said in the days leading up to the 2015 elections, Prof Osinbajo already began this unique type of campaign in Nigeria, connecting with the people like never seen before in this country.


“They are severely pained that despite going about with Ghana-Must-Go bags, Nigerians have openly rejected them, instead they are embracing Prof Osinbajo and his boss, President Buhari who are not sharing a dime.

“They will lose resoundingly at the polls in 2019, Nigerians will show them that they are tired of their selfish antics, their lies, their propaganda.
Akinloye added that Fayose displayed his ignorance before the whole world when he tweeted that Prof Osinbajo should visit Baga or Ajegunle.

“Fayose has a low memory or no memory at all. He has forgotten so quickly that as acting President, Prof Osinbajo visited Maiduguri against security advice.

“In June, less than 24 hours after the attacks in Borno, the acting President, Yemi Osinbajo, arrived in Maiduguri on a one-day official visit, defying the presumed security threat in the state.

He explained that Prof Osinbajo has shown that his dedication to the people and the country cannot be wavered.

PDP are green with envy over Osinbajo's door-to-door U.S style campaign
Share
Subscribe to our newsletter
Sign up here to get the latest news, updates and special offers delivered directly to your inbox.
You can unsubscribe at any time