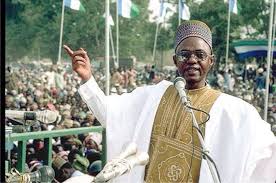 The family of former Vice President, Dr. Alex Ifeanyichukwu Ekwueme GCON, who passed on November 19, 2017, have expressed sadness  at the news of the passing away of the First Executive President of the  Federal Republic of Nigeria, Alhaji Shehu Usman Aliyu Shagari, December 28, 2018 .at the National Hospital .

The family in a statement signed by Apostle Goodheart Obi Ekwueme, said the former president was that increasingly rare figure: a man of active moral substance in political life.

The family extolled the late Shagari as an eptitome of high moral leadership, having meritoriously served Nigeria without any blemish whatsoever, a virtue he evidently shared with his late Vice, Dr Ekwueme.

The Ekwueme family noted that Shagari had the most cordial working relationship with his Vice President and both had greater hearts of service for the nation.  “They were more Nationalistic in their work relation and even though they both had different religious backgrounds, they were not polarized by the issues of religion and tribe. They were first and foremost Nigerians before Christians or Muslims, Fulani or Igbo. They were both selfless,” the family said.

The family recalled that Shagari again demonstrated his humility in his message through his son,  Aminu Shagari, at Ekwueme’s burial, where he said he chose him as his Vice President because of his impeccable integrity and character.

Shagari through his son had said, “I’m not here to give undeserved praises on Ekwueme, whatever I say here I have told him so in his life.
“I never thought his last birthday was his last though he was younger than me.

“Death is a certainty and we will all face it one day.

“I chose him because he came across as a man of impeccable integrity and character.

“We worked harmoniously because we had the same vision. He was a deputy I trusted and mischief  makers could not drive a wedge between us. His character remained impeccable. Even in death his achievements cannot be diminished.” The Ekwueme family expressed gratitude to  God that Alhaji Shagari lived to a ripe age and led an exemplary life, and urged Nigerians of all walks of life  to emulate him. “We pray that Almighty God  will comfort the family of the ex-president and all those who mourn him and will grant his soul eternal rest.”
Apostle Goodheart Obi EkwuemeFor The Ekwueme family

says Ekwueme family.Shehu Shagari: A man of active moral purpose
Share
Subscribe to our newsletter
Sign up here to get the latest news, updates and special offers delivered directly to your inbox.
You can unsubscribe at any time