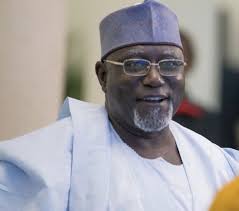 Jul 27, 2022
May I formally and respectfully present to Mr President, the released Dapchi School girls. I wish to inform Mr. President that one hundred and five (IO5) out of one hundred and eleven (III) female students abducted from the the Government Girls’ Science Technical College, Dapchi on 19 February, 2018 were released two days ago (21 March, 2018) following painstaking, backchannel dialogue with their abductors.

The remaining six (6) Dapchi girls are yet to be accounted for, and dialogue on these students is still on-going.

2. It may be recalled that the President had given a clear directive to security agencies to use peaceful options to ensure the timely and safe release of the girls. What followed were intense behind the scene dialogue spearheaded by the Department of State Services.

The insurgents’ only condition was their demands for cessation of hostilities and temporary ceasefire to enable them return the girls at the point they picked them.

They required assurances that the government security forces would keep to this.

3. The exercise was arduous and quite challenging. The sensitivity of the operation and some uncertainties surrounding it particularly routes to be used, nature of transportation, realization and concern that the girls were not kept at one place, issues of encountering Military checkpoints within the theater and indeed keeping the operation on strictly the “Principles of Need-to-Know” made the whole exercise more complicating

4. Beyond the release of the abducted girls, our primary interest for engaging in the dialogue was informed by the following:

i. Permanent, possible cessation of hostilities.
ii. Discussing the fate of the arrested insurgents and innocent Nigerian citizens being held hostage
iii. Possibility of granting amnesty to repentant insurgents.

5. These presently seem problematic because the insurgents are factionalized while holding various spheres of influence in their guerrilla controlled enclaves. The negative impact of social media on otherwise classified operations and of course, some of the utterances of the government functionaries who were not competent to comment on the issues, posed challenges that almost marred the rescue efforts.

6. However, despite these challenges, the Service has managed to successfully conclude the operation leading to the release of the abducted Dapchi School girls that are now before you, Mr. President.

STATE OF THE GIRLS AND MEDICAL CARE

7. On release, the victims were taken into the DSS medical facility and are put through programmes to give them mental stability. As such, they are given psychological mental evaluation conducted by trained specialists. About four (4 who were discovered to have broken limbs and were sent for Xray. Almost all of them had one skin infection or the other having not taken bath for over a month. They have been medically examined, and those with ailments were treated The measures are to ensure that they are in good health.

8. The girls, including four (4) representatives of their School (the Principal and Vice) as well as, their parents were brought into the medical facility as part of measures to relieve tension and anxiety. The presence of these representatives have further re-assured and stabilized the girls.

9. Mr. President, in view of the Nation’s experience through these years of insurgency, it is humbly suggested that efforts be sustained towards

i. Ensuring the release of all abducted persons in the North East Theatre of Operation
ii. Improve the strategic plan for the safety of schools in vulnerable locations, using all available national assets.
iii. Improve on the coordination efforts amongst security agencies to avoid future incidents.
iv. Expand the current dialogue towards conflict mitigation and resolution, with a view to getting an everlasting peace for the entire sub-region.

The feat so far recorded in the release of the victims is a clear example of collaboration among security agencies. First, let me express our profound appreciation to Mr. President for his direction and maximum support throughout the process of this dialogue. Also, I wish to acknowledge the contributions and sacrifices of the Nigerian Armed forces and the Police, our friendly neighbours and international partners who have played key roles in our determination to rid our beloved country of the menace of terrorism. Once again, may I thank Mr. President for the opportunity to present the recently released Dapchi School girls and re-assure you Sir, that the various services would continue to work in tandem to ensure the safety of our schools and other national assets. We remain thankful to you for your continuous support and hereby assure you of our unalloyed loyalty.
Thank you, Sir
DapchiDSS
Share
Subscribe to our newsletter
Sign up here to get the latest news, updates and special offers delivered directly to your inbox.
You can unsubscribe at any time