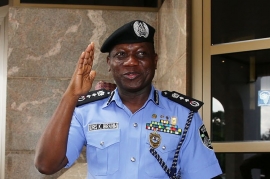 The Nigeria Police boss, noted that Information sharing is crucial to tackling the menace of trans-border crimes in West Africa; stressing that it is through such exchange that the Police was able to nab a Ghanaian/Nigerian kidnapper two weeks ago, after evading arrest for many years.

The IGP, who spoke in Accra, Ghana in a paper titled: “The role of Nigeria Police in national security and its contributions in West Africa,” which he delivered at an ongoing West Africa international security conference, said for several years, Evans terrorised Nigerians and nationals of many countries across West Africa.

He further said; “Efforts to apprehend him did not yield the desired results until we spread our search net wider.”

The IGP solicited closer ties among security agencies in the sub-region just as he emphasised the need to improve the method of monitoring and surveillance, particularly among border and coastal police units.

He also called for improved communication capabilities among intelligence gathering outfits in West Africa as well as mutual support to plug loopholes usually exploited by criminals.

The IGP said the Nigeria Police Force had 300,000 personnel in 127 area commands and 5303
divisions, adding that the force had consistently contributed to stability and peace in ECOWAS nations and under UN mandates.

“We also trained 100 police officers from the Republic of Niger on Mobile Police combat in 1998. At the end of the training, Nigeria donated trucks, riot equipment and tear smoke to the Nigerien government.”

The Police boss also said that the Nigeria Police Force also helped to stabilize Guinea Bissau in 2012, when the military intervened in its leadership and truncated democracy, adding that the Nigerian police personnel remained there until democracy
was restored in 2014.