President Muhammadu Buhari has broken his silence on countrywide #EndSARS protest, ordering the Inspector General of Police, Mohammed Adamu, to protect protesters and not open fire on them.

He said it is within their rights to express their grievances through protests.

Buhari has also reiterated the call for the youths to give the federal government time to address their demands as the team set up has already gone to work.

The President spoke through the Minister of Youth and Sports Development, Sunday Dare, who revealed this to State House correspondents at the end of a meeting with Buhari.

Persecondnews reports that Dare was in the Villa to brief President Buhari on the festering protests against police brutality.

He has also admonished that miscreants must not be allowed to hijack the #EndSARS protest and derail it from its noble objective and genuine agitations.

“President Buhari told me that he has heard the youths and that as a father of the present generation of youths, he wants them to be protected and not suffer police brutality,” he said.

Dare said that President Buhari assured him that the demands of the protesters are being met.

“I also thank Mr. President for being responsive to the demands of the younger generation to ENDSARS but also the other demands to ensure we have deep seated reforms, making sure that an investigation is conducted to justice all those that have been responsible for the extra-judicial killings, extortions, human rights violations and torture.

“But more importantly, I was able to let Mr. President know that the youths of this country are law abiding, they are brilliant and smart, they are young ones that love peace and also want an environment to pursue their dreams and career. That they believe in this country and that they expect the reforms that have been promised will be followed through.

“Mr. President assured that the demands of the protesters are being met in a timely fashion, some have been met already. He said he accepts their demands and that government is already responding at various levels.

“Mr. President said the youths of this country have spoken and he has heard and he has since gone to work for the youth of country, not just as a president but also as a father of the younger generation.

“He said as a father to this generation of our youth, his desire is for them to be well protected and live in a country where they enjoy their freedom and do not suffer from any form of police brutality.

“So, on the whole I got the assurances of Mr. President that the youth of our country are a great resource and not a problem. He appreciates the fact that they have brought the SARS issue to the fore  through their peaceful protests,” Dare quotes the president as saying.

The minister also said:”He recognizes that they have called upon the government to do what is necessary and that as a president and a father, he will make sure that the demands put forward are met and that he will work to ensure that we get the reform we want.

“He will ensure that our youth are no longer profiled but celebrated and supported for their vast potentials, skills and for the fact that the future of our country lie in the hands of our youth.”

Asked to speak on plans to engage the youth as the protest continues, Dare said: “First, Mr. President said that as far as he is concerned, it is important to allow the younger generation to exercise the freedom to protest but he did say that such protest must be in a peaceful manner.

“Of course, he is worried about some of the exceptions to the peaceful nature of the protest. And for him it is important that these protests are properly guided, he said part of the demands that were made was to ensure those protesting are protected and any police officer that has in one way or the other attacked any protester be brought to book.

“So, Mr. President thinks it’s a fundamental human right, so long as the protest is peaceful and focused. He said he has been responsive to the demands put forward by the protesters. He believes the youth to a very large extent are law abiding.

“They are young people with dreams and expectations of the government and the society and that they have a right to demand for certain things, which is why he has a very attentive ear to their demands.

“On engagement, conversations with the Nigerian youth have since started, they were able to get their demands across to government. The President spoke directly on Monday (last week), condemning the killings particularly the extra-judicial killings that have occurred before, police brutality and approved investigation and to bring the guilty to book.

“That is one level of conversation. Last week, we had a virtual town-hall meeting in which we had the police PRO and myself engaging with over 145 youth online, where they asked numerous questions we provided updates, clarity and the police was able to give further details on how the reforms were proceeding and will proceed, in some cases clear timelines on how the reforms will take place.

” The demands are already in the public and the government is already addressing those demands, that in itself is an engagement and a conversation.”

On his capacity as the minister of youth, Dare appealed to protesters that their security is important.

“In the face of infiltration by miscreants trying to hijack these protests and give the entire protest a bad image, it’s important that I make this appeal that a consideration is given by moving this protest from protest to action.

“We live in a constitutional democracy, this processes cannot be usurped or bypassed, it must take time. But I think that the youth of this country have been heard, the agenda is clear and the government has taken note, government has gone to work.

” And I think by monitoring team we have, the youth must hold all government at all levels to account, particularly on demands that have been made and other issues tangential to their aspirations as younger generation of this country,” Dare said. 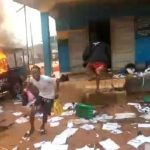 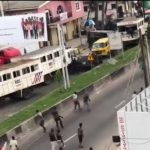