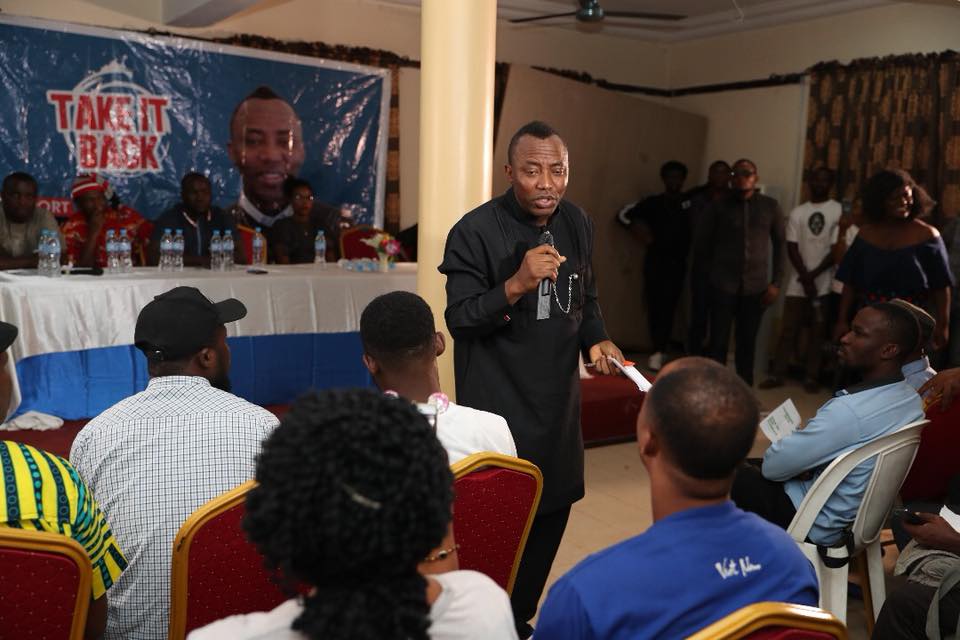 Detained Omoyele Sowore, the Convener of #RevolutionNow Protest and publisher of Saharareporters, a frontline online publication, on Monday asked a Federal High Court in Abuja to grant him bail.

The fresh bail application was filed after a court failed to hear his earlier application challenging the detention order issued against him by Justice Taiwo Taiwo on July 8, 2019.

Sowore was arrested in Lagos and has been in the custody of the Department of State Services for more than a month after it secured a court order to detain him for 45 days in the first instance.

The DSS had slammed on him treason charges.

The affidavit he filed in support of the application stated in part, “That the applicant (Sowore) herein has never been charged with any criminal offence whatsoever.

“That the Nigeria police also conducted an investigation on the matter and made its findings public.

“That the persons who participated in the protests of August 5, 2019, were charged with the offence of unlawful assembly at the Magistrates’ Court in Ebute Meta, Lagos State, Osogbo in Osun State and Calabar (Cross River).

“That on the August 9, 2019, the applicant filed an application to set aside, discharge and/or vacate the said ex parte order permitting his detention for 45 days.”

The security agency had accused Sowore, the presidential candidate of the African Action Congress in the last February 2019 poll, of planning to topple the President Muhammadu Buhari government, through the protest.

Sowore denied the coup allegations insisting that he only mobilised Nigerians to protest against bad governance and other vices.

Justice Taiwo Taiwo, following an ex parte application by the DSS, on August 8, issued a detention order permitting the security agency to hold the activist for 45 days to enable it to conclude investigations.

But the efforts of his team of lawyers to make the court to hear the application which was filed over a month ago, have yielded no result.

In his fresh application which he filed on Friday, Sowore’s lawyers argued that the DSS had completed its investigations, adding that by Section 28 (4) of the Terrorism Prevention (Amendment) Act, 2013 “a person detained pursuant to Section 27 (1) can be admitted to bail by this honourable court.”

One of his lawyers, Mr Marshal Abubakar, who deposed to the affidavit filed in support of the application, prayed the court grant bail to Sowore in liberal terms.

He added that the activist had responsible persons who could stand as sureties for him.

The supporting affidavit read in part, “That no criminal charge whatsoever has been brought against the applicant herein.

“That the applicant undertakes not to interfere with the investigation of this case or make contacts with the witnesses of the respondent.”

bail applicationDSSNigeriaSowore
Share
Subscribe to our newsletter
Sign up here to get the latest news, updates and special offers delivered directly to your inbox.
You can unsubscribe at any time