Co-founder of BudgIT, Seun Onigbinde, has resigned as the Technical Adviser to the Minister of State for Budget and National Planning, Clem Agba.

Upon further reflections on the furore that has been generated by my new role as the Technical Adviser to the Minister of State for Budget and National Planning, I humbly resign the appointment, he said Monday.

Onigbinde has bowed to pressure after outrage followed his appointment with the Buhari Media Organization saying he lacks honor. 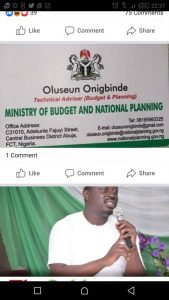 In a statement signed by Niyi Akinsiju and Cassidy Madueke, BMO’s Chairman and Secretary respectively, the group wondered how “an imbalanced caustic denigrator of the government of President Buhari would be called to serve in the same administration he had described in the most unpalatable terms.

“Seun Onigbinde lacks honour and integrity, which are characters known of President Buhari, and thus could not be in the same team with him.

“He has severally described the President with the most distasteful terms, and has shown, especially on social media, that he sees nothing good in the administration of President Buhari.

” Onigbinde had also gone to the shameful extent of describing those who support the President and his administration as ‘ethnic jingoists’. He once referred to the President as ‘incompetent’, and accused him of being a dictator committing illegality.

Budget ministrySeun OnigbindeTechnical Adviser
Share
Subscribe to our newsletter
Sign up here to get the latest news, updates and special offers delivered directly to your inbox.
You can unsubscribe at any time