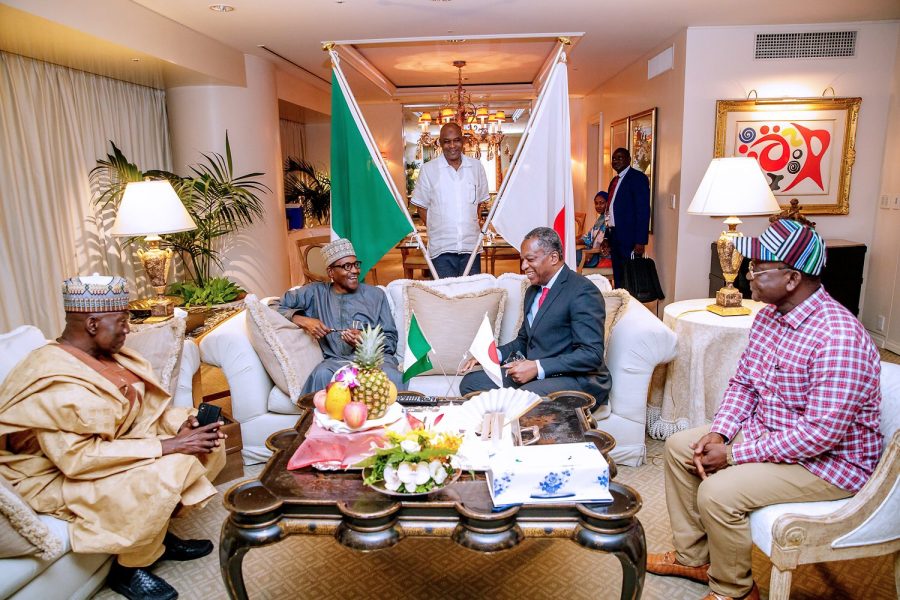 President Muhammadu Buhari arrived Tokyo on Monday for the  start of the Tokyo International Conference on African Development, TICAD.

The seventh session of the conference, held once every three years, will take place from Aug. 28 through 30 with leaders from 54 African countries and international organizations set to attend.

Prime Minister Shinzo Abe, who will co-chair the conference, plans to announce steps to support Japanese firms that want to do business in the region, as well as measures to help African countries with fiscal consolidation, according to reports in Tokyo.

China has been criticized for handing out large loans under its Belt and Road infrastructure development initiative to  African countries that are ill-equipped to pay off the debt, often called debt-trap diplomacy.

Japan plans to include “concern” over excessive debt in the post-conference declaration, Per Second News gathered, a move aimed at calling out China’s lending practices in the region.

The government of Prime Minister Shinzo Abe, wants the post-conference declaration to include references to some African countries being saddled with debt, and touch on the importance of “high quality” infrastructure, a phrase Japan often uses to differentiate its projects from Chinese ones.

One such measure would be to send financial experts to debt-ridden countries on multiyear missions to help improve their finances, they said.

During the last conference held in Kenya, Prime minister Abe said Japan views Africa as partners and not just a donor.

Japan, whose working-age population is rapidly shrinking, also hopes to make it easier for African students to find work in the country after graduating.

Japan, one of the largest donors to the UN, has long lobbied for a permanent seat on the Security Council and has urged African countries, among others, over the years to support its position. An important campaign in Africa considering the number of votes (54) African countries hold in the UN.

African CountriesBuhariChinaDebtsShinzo AbeTICADTokyoYokohama
Share
Subscribe to our newsletter
Sign up here to get the latest news, updates and special offers delivered directly to your inbox.
You can unsubscribe at any time