On August 15, when Kabul fell, Mr Aimaq, 69, found himself in a situation shared by thousands of Afghans: jobless, in danger and effectively stateless in his own country. 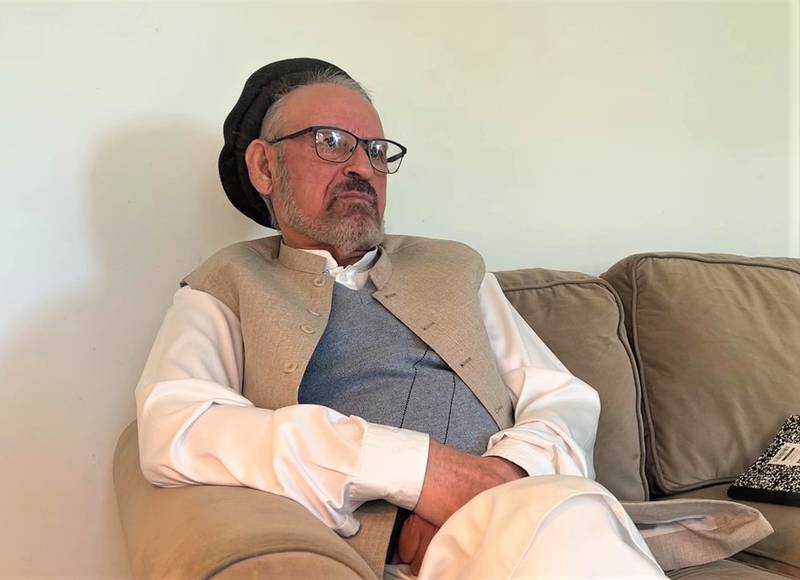 Former Kabul mayor Fazal Karim Aimaq had seen more than his share of turbulence during decades of war, but nothing prepared him for the speed his regime collapsed in 2021, sending him and his family on a desperate scramble to get out of Afghanistan before the Taliban could catch them.

The politician was working in the Afghan capital as a member of parliament for his home province of Kunduz when the Taliban seized district after district in stunning succession.

A week before, Mr Aimaq had met with Afghanistan’s Minister of Defence Bismillah Mohammadi on behalf of his constituents. Mr Mohammadi told Mr Aimaq that then- President Ashraf Ghani had called all the military bases and told them to stop fighting against the Taliban and begin a retreat.

“I went there to tell Mohammadi that my people have terrible problems and he said, ‘I am not able to help my own military personnel. The civilians are not important, not now,’” Mr Aimaq told The National.

On August 15, when Kabul fell, Mr Aimaq, 69, found himself in a situation shared by thousands of Afghans: jobless, in danger and effectively stateless in his own country.

Mr Ghani fled the capital that day, shortly after giving “a speech saying that he’s not going to leave the country even if there’s ‘one drop of blood in his body’,” Mr Aimaq recalled.

“It was like a chain and the chain was broken and all the single links ran away,” he said.

Decades of fighting the Taliban, including in the late 1990s under Afghan resistance leader and anti-Taliban icon Ahmad Massoud, left a target on Mr Aimaq’s back and meant his loved ones were in jeopardy.

During a recent visit to his new home in the small city of Clarkston in the southern US state of Georgia, Mr Aimaq and his relatives recounted to The National the harrowing tale of their escape.

“When I left my house on the 15th of August… I told myself that it’s goodbye to my house and everything and I will not come back,” said Mr Aimaq, wearing a white shalwar kameez and counting through a string of prayer beads.

‘I will kill you all’

One of Mr Aimaq’s sons, also called Fazel Aimaq, said Mr Ghani’s departure from the presidential palace precipitated a desperate flurry of phone calls and WhatsApp messages as the family tried to find a contact who could help get them on a flight out of Afghanistan.

A cousin put him in touch with a British contact who then phoned an American.

“Go to the south gate of the airport — now,” the American said.

At about 2am, the younger Mr Aimaq gathered his family — 18 of them in all — and paid a van driver the equivalent of about $40 to take them to the airport.

The family lay in the back of the van, piled on top of each other so that they could not be seen through the windows.

Upon reaching the south gate, they found hundreds of people crowded around the entrance — beyond them, two tanks with armed Taliban fighters blocking the airport’s entrance.

“We made it this far and now we had to navigate this,” the son said.

He remembers leaping from the van, not only to distract the militants, but to also find a way of bringing the family inside.

His actions led to an intense exchange with the fighters, who demanded to know if he had ever worked with the Americans.

“My mother is in a wheelchair and they were looking in the windows. My father was wearing a mask so they did not recognise him — otherwise, they would have shot him on the spot.”

The Taliban eventually allowed him to pass, but not before threatening to kill his family.

“They told me: ‘If you go there, and the Americans don’t accept you, when you come back, I will kill you all.’”

That morning, all 18 of the Aimaqs managed to escape, shoulder to shoulder on a US C-17 Globemaster, which took them to Qatar where they slept on stretchers for nine nights in various airport hangars with 4,000 other refugees and evacuees.

“I was talking everyday to the soldiers and to the captains about where they were going to take us, who I was… what passport I was holding,” said the son, who was holding a diplomatic passport along with his father.

After days of back-and-forth, the family was finally taken by chartered plane to Sofia, Bulgaria, where they refuelled and then went directly to Dulles Airport in Virginia.

“When we got here, everybody welcomed us by clapping,” the younger Mr Aimaq said.

From there, they spent 58 days at US Army Base Fort McCoy in Wisconsin and on November 22, Clarkston, Georgia, became their new home.

The small town became a refugee resettlement area in the 1970s after the war in Vietnam and friends from Afghanistan had settled there about five years before.

Clarkston is known as the most ethnically diverse square mile in America, DeKalb County Commissioner Ted Terry said, with over 40 nationalities and more than 60 languages spoken in about a one and a half square-mile city.

“Clarkston attracts native-born Americans who have … compassion,” he said.

Mr Terry, a former mayor of Clarkston, recently met the Aimaq family, who are keen to be reunited with one relative, Ruhina, currently living in Dubai.