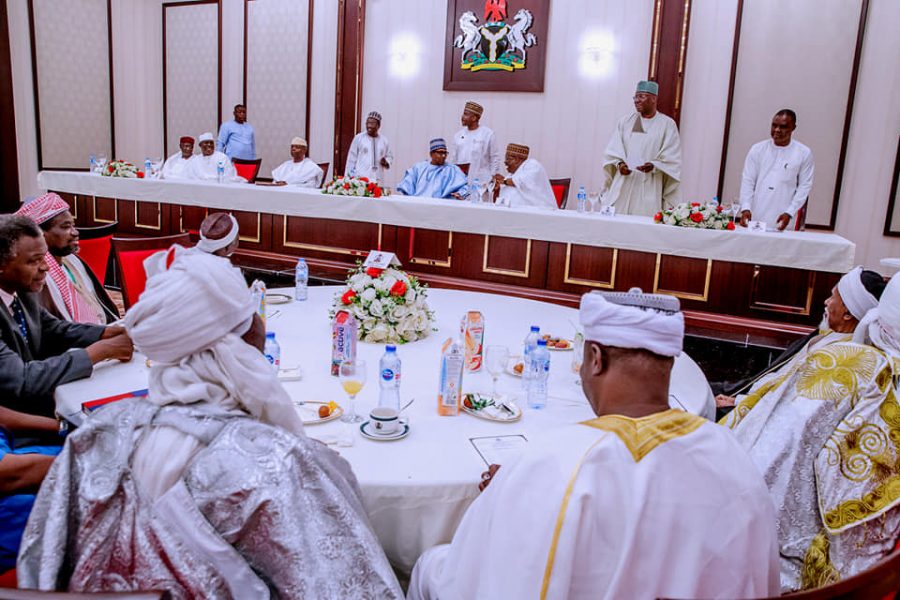 He acknowledged that residents of the FCT did not vote for him and his Vice President, Yemi Osinbajo in the 2019 general elections.

According to him, securing the nation’s capital means securing himself and his vice, Osinbajo, assuring that inspite of the toughness of his neighbours (opposition), he will continue to do his best for the country.

“I have just spoken to the senator on my left (Philip Aduda) and I told him that his constituency did not vote for me. So I was very pleased that when they made the arrangement they put him very far way from me. I have all the results of all constituencies. I am not threatening FCT because to make FCT secure is to make myself secure and the Vice President. I think they know that they are necessary evil that was why they decided to vote for PDP.”

Buhari said this amidst laughter when FCT Permanent Secretary, Christian Ohaa, led a delegation of Abuja residents comprising religious leaders, National Assembly members, civil servants, service chiefs and heads of other security agencies among others paid him Sallah homage to mark the successful completion of this year’s Ramadan fast.

Buhari who commended Osinbajo and other leaders for being exemplary in their conduct, urged them not to break down else the impact will reverberate across the country and his administration will loss its popularity and whatever efforts they make will not be appreciated.

The President said: “I want to appreciate the number two man of the country because he knows what we are going through very quietly. I am very pleased that you came with this very powerful constituency.

“I appeal to you to remain exemplary so that those under you will know that the country is doing very well. If you break down and complain, the impact will reverberate all over and then government will not be popular and whatever efforts we are making will not be appreciated.

“During my long journey to this place, 2003, 2007, 2011, there were interesting political developments that enabled me visit all the local governments in this country, all 774 local governments. First port of call whenever I visit any local government was to visit the community leader for understanding and support. I am very pleased that Nigerians understand me that although I was a governor, minister of petroleum and one time head of state, people know I don’t have a lot of money to give. So when I went round, I smiled and greeted them and I think it has helped. Because by the time I went to campaign for my second and last term constitutionally, I visited all the states this time around, some two states in a day, I thank God for giving me the stamina to do it. What impressed me most was the turn out in all the states and FCT. The number of those who turned out are more than what anyone can afford to pay or force to come and listen. So I am very pleased that a lot of Nigerians have voted me, they sympathized with me for what I went through between 2003 and 2019. I went to court up to Supreme Court and in 2011, I went to court for eight months. And in the last one, God answered our prayers and gave us victory, and brought in technology through the permanent voters card. And they said whoever is aggrieved should go to court.

“You all know as much as I know that most of my supporters are looking for the next day’s meal, we don’t have money to give. In 2011, I said God dey, in 2015 God brought technology – PVC and that is how we won.

“I thank you very much, those of you who suffered very much to support me. And I congratulate you for being happy that I made it and I assure you that I will continue to do my best inspite of the toughness of my neighbours.”

Osinbajo, who commended President Buhari for a successful fast, said the gathering which cuts across religious and ethnic divide was a demonstrate that the country was united.

The Vice President said: “I want to say that God almighty has been extremely good to you and to our government. I recall about two years ago when I had to host this particular event because you were away on medical leave at the time.

“Our country as it is today, is at a threshold of greatness, you have said so many times. Any time when something great  and something important is about to happen, usually you will have very many and negative opposing voices that want to keep that thing from happening.

The FCT Permanent Secretary, said the delegation came to congratulate President Buhari for a successful fast as well as a successful inauguration to begin second term in office.

Ohaa said, “We pray that almighty God in his infinite goodness and mercy continue to grant you good health and wisdom as you steer our country back to the path of social harmony, security and economic recovery.

“The people of the FCT stand solidly behind you as you begin this task and pledge our support and cooperation in the coming years ahead.

AbujaBuhari vows to secure FCT despite voting PDPPDP
Share
Subscribe to our newsletter
Sign up here to get the latest news, updates and special offers delivered directly to your inbox.
You can unsubscribe at any time