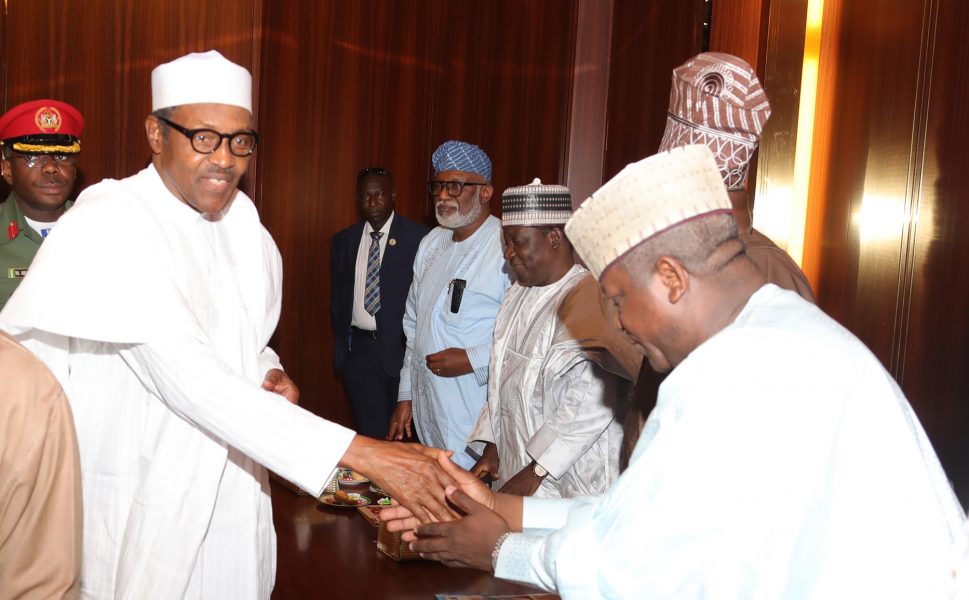 PRESIDENT BUHARI MEETS SOME APC GOVS 4. President Muhammadu Buhari in a handshake with Chairman of APC Governors' forum and Governor of Zamfara State, Alhaji Abdulaziz Yari and others meeting with some APC Governors at the State House. PHOTO; SUNDAY AGHAEZE. OCT 4 2018

Battle fatigued governors led by Abdulaziz Yari (Zamfara), Abdullahi Ganduje (Kano), and Ibikunle Amosun (Ogun) affected by post-primary issues in their respective states met with president Muhammadu Buhari on Friday, pleading with the president to step up efforts to end the cycle of crisis that torments the party.

“All I am seeking is justice, said Yari.

“So, what we did, we filed the results and kept it under the watch of those people and waited to see what was going to happen. The second committee went 32 hours to the closing, we thought the committee will hasten and say that these are the modalities of the election, these are what we are going to do but the committee wasted about 18 hours discussing about how the modalities are going to be taken. So, when we realised that, we were actually advised by the supervisory agency that is INEC and other agencies there that the best thing people are out to vote, since 7am so, we should ask them to start counting. When they finished, they released the materials and we adopted the numbers.

“Already, we had produced our own set of forms for the national Assembly which we have done and then, when we concluded, I didn’t see members of the committee until one and half hours to the time. Then, when they came I asked them what they came for. They said they came for reconciliation and I said which reconciliation? People cannot reconcile over a month and you are trying to reconcile in an hour. Then, I realised that there was a game that was being played so that we can run out of time. And then, maybe, the national body think they have other ways to produce a candidate which is a crude way because section 87 is very clear of the Act that the party must follow a process before producing any candidate. Therefore, the most important is that we conducted election on the 3rd and 4th of October and all agencies INEC, Civil Defence, Police, and DSS were there and they signed for us and the report was written by the REC that elections were conducted. And unfortunately, for the INEC to say that there was no election, we don’t know where they got their information but we believe they have a report directly from the representative there that election was held in Zamfara state, so, it depends on what they want to do.

“But, in any way, we advise. When the chairman of the committee came out and said there was no election in Zamfara state, we realised it was going to be a litigation issue. We quickly rushed to court, we filed, and the case is coming up next week. So, I think there is the only saving grace for the party and INEC for court of competent jurisdiction to give judgement on Zamfara matter, so, there was election. “

On allegations that he plans to leave APC, Yari said, “No, no, no, I don’t know whether that is a joke or otherwise but for me, if you check my history since 1998, APP, and 2002 when Buhari joined ANPP, and 2015 APC. No time that I shifted from one party to another. That is not in my culture. So, the issue of leaving the party is not true. But some other people are sending rumour through the social media. I have seen my picture with the PDP and other parties. Yes, I cannot deny pressure from the people that we should leave APC but what I told them is that what we are looking for is just justice. We conduct electon and see what the result is going to look at. But I think for any body to come under the national secretariat and say he is going to nominate a candidate, I think, it is a very, very huge joke. 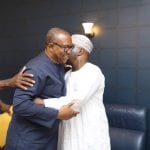 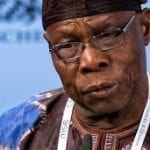