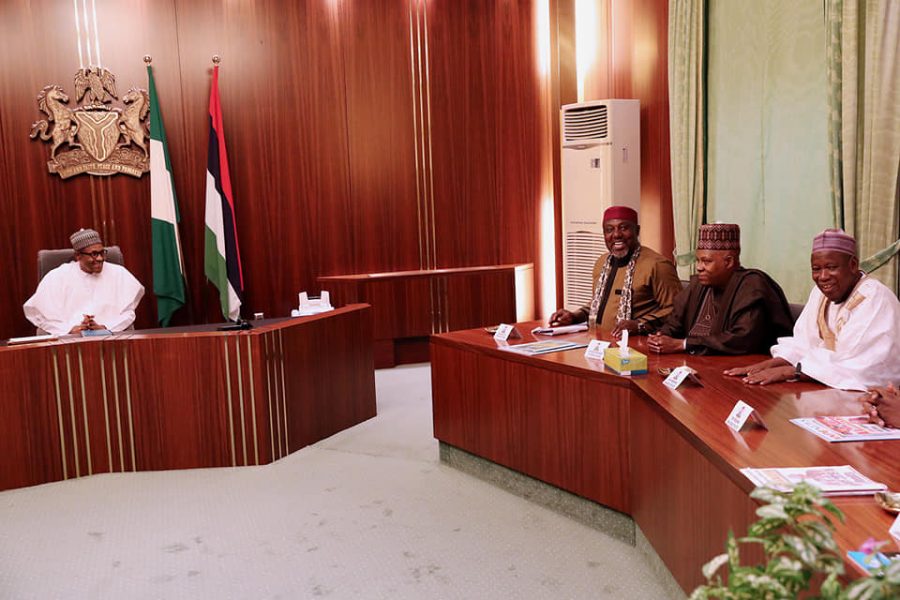 After a meeting with President Muhammadu Buhari Wednesday a band of governors led by Borno state governor Kashim Shettima, expressed optimism that the ruling party would prevail in the 2019 elections, thanks in part to the party’s beefed-up field program.

The governors assured that they were not jittery over the emergence of former Vice-President Atiku Abubakar as the main opposition candidate to challenge President Buhari in next year’s presidential election.

The governors at the meeting that was also attended by the Vice President, Yemi Osinbajo at the State House, were Mohammed Abubakar (Bauchi); Abdullahi Ganduje (Kano); Kashim Shettima (Borno); and Akinwunmi Ambode (Lagos) as well as the Secretary to the Government of the Federation, Boss Mustapha.

Chairman of the APC Governors’ forum; Imo State Governor, Rochas Okorocha, speaking to journalists about the outcome of the meeting described it as crucial meeting with the President.

“We are here as a delegation of the APC Governors to congratulate the President for emerging the Presidential candidate of our great party APC for the 2019 election and we believe that its victory well deserved. The honour we have given him confirms our confidence in the man Buhari.

“The President is quite happy with this visit and he will soon give us a date as we requested, to celebrate him and tell the world about our joy and happiness that he emerged as our Presidential flag bearer, which is victory assured come 2019,” he said.

On plans to address issues arising from the recent primary elections, Okorocha said, “We have looked at issues concerning our primaries. In every democracy, we expect some kind of disagreement and we have kindly requested that something be done fast, to bring all warring factions together so we can have a united party to face the challenges ahead and we are happy that that will soon take place. Most of the problems are already being resolved, except for one or two states like Zamfara and where it becomes very difficult we will ask for the President’s intervention in the matter.

The Governor said the APC will not be dragged into what he described as noise by the opposition, ahead of the 2019 election. Rather, he said the campaign of the party would be based on issues.

Governor Okorocha also said that the party has concluded not to engage in any verbal attacks with any candidate in the forthcoming election.

“Our election this time will not engage on castigations or talking. We will be taking on issues, Nigerians are tired of political abuses, what we want to be talking about is issues, the track records of people involved in our elections. Nigerians are very wise now, before they elect anybody they will ask questions, what has been your tract records, who were you before, who are you now and everything about you. And for that reason we are confident that in 2019, APC will go through.”

On whether the controversy surrounding the Zamfara State APC primaries was part of the discussion,, he said, “Zamfara is one of the issues that we have addressed also.”

When asked whether the APC was jittery because of the emergence of Atiku as the Presidential candidate of the PDP and his talking tough l since he emerged, Okorocha said, “I don’t know about talking tough, we can’t be jittery and history is there to speak, history is very important and it is there to speak.  So like I said we are not going to engage in this verbal war with anybody, we will be talking about issues. If we say look, you are not good, we tell you what we can do and we cannot do and what others cannot do.

“APC is not going to join in those topshop but right we are discussing issues of what our party can for our people.”

Asked what was the President’s response, he said, “The President is quite happy with the whole outing and he is looking for a date to invite the governors, in fact, he will give us a date to celebrate him and tell the world our joy and happiness that he emerged as our Presidential flag bearer which is victory assured 2019.”

Also speaking in a similar vein, Secretary to Government of the Federation SGF, Boss Mustapha said the move by the Governors is a welcomed one, adding that the APC is a big family that has to mend all fences ahead of the 2019 election.

He said, “It is a welcome development, we are one big family in a contest there is bound to be winners and losers but in the spirit of the game of politics which is like any other sports, after the game is over, whoever has emerged victorious must be magnanimous and gracious in his victory and whoever has lost out will also accept it in the spirit of sportsmanship.

“So, this is a welcome move, our governor who is the Chairman of Progressives Governors Forum, has spoken rightly all the things that are in motion to ensure that we quickly heal the wounds and bring the family together for a greater task ahead.

“We are a government that has credibly performed this morning I had the privilege of laying before the council a compendium of the policies, the programmes and the projects initiated and implemented by this government in two and half years. A total of one thousand and forty two page document, not stories, facts of what we have been able to achieve.

“I think we are set to record, this campaign will be driven by issues, this campaign must be predicated on what you are able to bring to the table for the people of Nigeria. It is not going to be a noisy campaign, anybody that is preparing for noise should be prepared to receive defeat in February of 2019.”

Meanwhile, a minister who spoke on the condition of anonymity has disclosed that some governors as well as ministers uncomfortable with Adams Oshiomhole’s leadership style at the national level want him sacked if the APC is to record any victory in the 2019 general elections.

The source said, “The Governors are insisting that Oshiomhole should go. They can’t work with him for the election next year. They refused to contribute to the APC convention and want the party chairman to use the N10 billion he collected from the sale of nomination forms. We are also monitoring how he is spending it.”

The source hinted that those that met with Buhari were those that have cordial relationship with Oshiomhole.

Governor Jibrila Bindow of Adamawa State and his colleague from Ogun state, Ibikunle Amosun were at the State House on Tuesday. While Amosun who met behind closed doors with the President refused to talk to the press, Bindow left through the back exit after meeting with the Vice President, Yemi Osinbajo.

We feel very confident about winning 2019 presidential elections - APC
Share
Subscribe to our newsletter
Sign up here to get the latest news, updates and special offers delivered directly to your inbox.
You can unsubscribe at any time