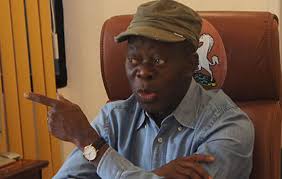 Oshiomhole, who was on a private visit to the President in the presidential villa, said an All Progressive Congress (APC) activist and loyalist, he came to reassure  Buhari of his absolute and total support for his government and even for 2019 elections.

Asked if he was saying Buhari should not heed Obasanjo’s advise and step aside, Oshiomhole said, “I’m not sure when I see the list of the advisers that president Obasanjo is one of the advisers. But I also recall with respect that the day President Obasanjo was swearing  in some of his advisers, he did say that anybody who is his adviser can advise him, he will make his own decisions. And I think that principle still stands.”

“I think that in moments like this nobody should seat on the fence. Our country have challenges and there are huge temptations here and there and is important he knows that he has men and women who even at this hour have huge confidence in his leadership ability. Everything taken to account I believe that every Nigerian who wants us to sustain some of the renewed vigor to deal with one of the most challenging problem that Nigeria has faced, namely corruption and things like that, you cannot but appreciate the president and all that has been done under his leadership this past two years and some months.”

“I think that people have to realize that the amount of damage done by the previous governments, you know when people say no blame game maybe yes, maybe no. But where I am come from, people say that is only a fool who will be working in the road, get into a pothole and fall and then get up and continue the journey, go to the hospital and treat himself. But a wise man must interrogate how and why did I fall and maybe in the cause of doing that find that there is a pothole. The first and simple thing to do is to fill that pothole before you continue on your journey and then go ahead and treat yourself.

“Nigeria was below ground  level and from what you guys report that I read, we have always had challenges but never in terms of scale, magnitude what president Buhari inherited is difficult to describe.

“So, I have said so before that when you meet such a situation, your first task is to halt the drift, when you half the drift then you stabilize before you begin to go, there is no miracle about it.

“I don’t think that anybody who understands the challenge of nation building,  of national economic management etc will expect that in two years you can fix in a sustainable manner all of the things that have been destroyed over 16 years before this party came into office.