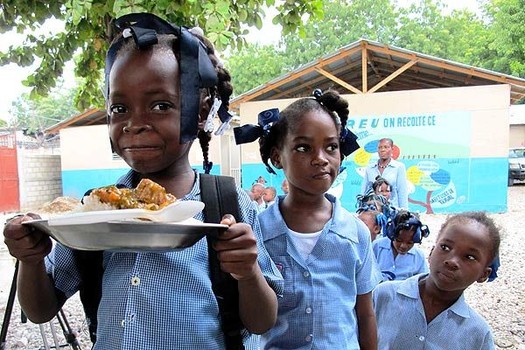 THE Presidency has said no fewer than 246 million meals have been served under the National Homegrown School Feeding Programme (SIP) of the President Muhammadu Buhari administration.

A statement by the Senior Special Assistant on Media and Publicity, Laolu Akande, said the total figure is expected to reach 313,928,420 meals by the last week of February 2018.

It revealed that the School Feeding Programme now feeds 6,044,625 pupils in 33,981 public primary schools across 20 states.

Over 246 million (246,355,190) meals has been served to date to primary pupils across 20 states in the country, since the first meal served in December 2016 under the National Home Grown School Feeding Programme (NHGSFP).

,More states are expected to be added to the programme this year. The NHGSFP plans to implement feeding in a total of 28 States, while it aims to link farmers to school feeding markets.

In the same vein, several milestones were recorded by the Buhari administration’s National Social Investment Programmes (NSIP) in 2017, in line with its inclusive growth plan, which includes tackling poverty and hunger, and creating jobs for Nigerians.

About 40,000 direct jobs have since been created from the School Feeding Programme across the participating states, the presidency also revealed.

“Also, in 2017, the school feeding programme collaborated with the Federal Ministry of Health to deliver an integrated deworming programme for pupils in all public primary schools classes 1 to 6 across 17 states nationwide.

“Meanwhile, the School Feeding programme now has a social media-based quality assurance tracking system, #TrackWithUs, ensuring that required standards for menu for pupils and meal distribution are adhered to across the states in a transparent manner.

Similarly, the Conditional Cash Transfer (CCT) has so far recorded over 280,000 beneficiaries in 21 states, while about 300,000 Government Enterprise Empowerment Programme (GEEP) micro-credit, interest-free loans have been disbursed nationwide.

In the same vein, in 2017, the N-power scheme, which is targeted at providing jobs for unemployed young graduates, started its physical verification process for the 2017 applicants. In 2018, more beneficiaries are expected to be added to about 200,000 young graduates currently employed under the scheme.