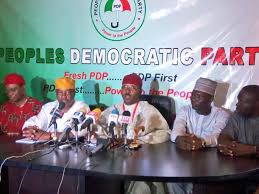 Recent days have offered yet more proof that the Peoples Democratic Party (PDP) are in disarray as they try to repair their tarnished image.

A parallel faction has emerged in Abuja led by one Emmanuel Nwosu, the group which referred to itself as Fresh PDP, is calling for the nullification of the party’s convention held on December 9 at the Eagle Square in Abuja.

Briefing newsmen at the party’s secretariat located at Tito Broz street, off Jimmy Carter street, Asokoro, Nwosu said the process leading to the emergence of the Uche Secondus-led National Working Committee was fraught with illegality and abuse of electoral process.

Per Second News in a report Monday revealed that a former minister also called for the cancellation of the convention.