[dropcap]S[/dropcap]enate President Bukola Saraki and the deputy Senate President Ike Ekweremadu joined the embattled Dino Melaye on Tuesday to blast plans by INEC to pursue the recall process of the Kogi senator.

According to Ekweremadu, “What is happening in Kogi, in respect of Senator Dino Melaye, as far as this constitution is concerned, it is an exercise in futility. They are just wasting precious time because the constitution is clear on what should happen.

“In 2010, this parliament amended the constitution regarding section 69. It states that the number of those who are supposed to have requested Dino Melaye’s recall are supposed to line up somewhere in Kogi, while he and his lawyers and each person would verify their signature. 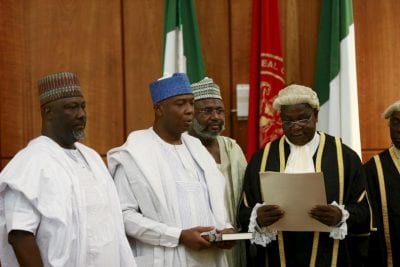 “It is possible that the attorney-general of Kogi state has not advised them properly. If he had done that, I am sure they would have applied their time to more meaningful ventures in the state. The process of recall is the equivalent of impeachment of executive positions.

“To avoid the abuse of impeachment, they made it very strict, provisions and procedures were made on how impeachment can take place. That is why people are not taking that route of removing governors by impeachment.

“When they are done with that, they go back to section 68 which states that the president of the senate receives from the chairman of INEC the recall of the member. They would also present evidence satisfactory to the house. So, they need to come back here and convince each and every one of us that they have done the correct thing. Unless they do that, they cannot even give effect to it. So, why are we wasting our time? Let us move on and allow them to waste their time.”

The Senate president said its an exercise in futility, while another senate speaking under the condition of anonymity said, “We are going to use every tool we have to scuttle the plans.”

DinoINECKogiMelayeNigeriaRecall
Share
Subscribe to our newsletter
Sign up here to get the latest news, updates and special offers delivered directly to your inbox.
You can unsubscribe at any time

Baru To NNPC Staff: Progress Made But Much Still To Accomplish In One-Year Anniversary Speech