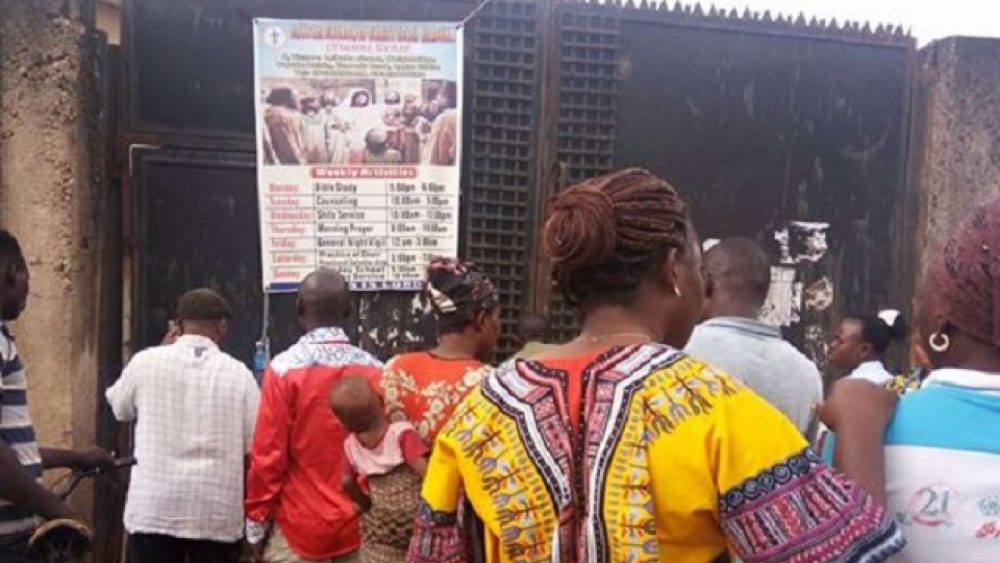 Wife of the church’s founder simply identified as Ajidara, her two-year-old daughter and another woman who lived in the church, were said to have been killed.

“A bloodstained grinding stone was found on the premises and that was when we suspected that the dreaded cult group known as Badoo had struck again, said a resident.

It was gathered that the cultists scaled the fence of the church in the early hours of today and in their usual way of killing their victims, used a grinding stone to batter them in the skull before wiping the blood and brain membrane with handkerchiefs they would later sell to money ritualists.

The deceased was identified as Mrs. Ajidara

The calamitous group earlier last week killed a family of five in gruesome manner.  No fewer than 25 people have been killed by the group with base in Ikorodu area of Lagos.

The Lagos State Police Command has issued a directive that henceforth all residents of Ikorodu should have a valid form of identification.

The order was contained a in a statement issued by the command aimed at addressing the menace of rampant ritual killings by suspected members of a ‘Badoo’ cult group‎.

The cult group has reportedly killed several residents of the Ikorodu and carried out other dastardly acts. About 138 suspected members of the group have, however, been arrested, the police had said.

In a statement on Monday signed by the Lagos Police spokesperson, Olarinde Famous-Cole, emphasised that this became necessary because of the series of police operations in the area.

BadooChurchGangIkoroduLagos
Share
Subscribe to our newsletter
Sign up here to get the latest news, updates and special offers delivered directly to your inbox.
You can unsubscribe at any time