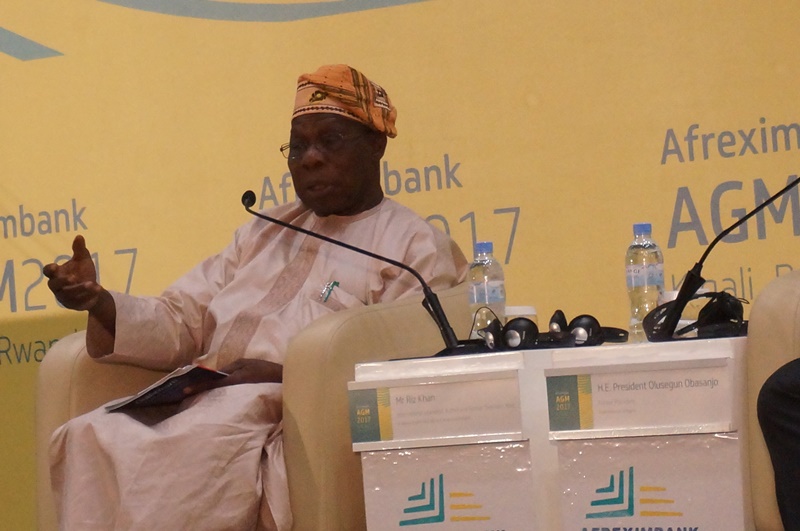 Former Nigerian President Olusegun Obasanjo has proposed that the Economic Community of West African States (ECOWAS) adopt a two-track approach to the introduction of a common currency, with countries that are ready being allowed to go ahead with implementation.

Speaking in Kigali as a Special Guest at activities marking the 24th Annual General Meeting of the African Export-Import Bank (Afreximbank), Chief Obasanjo said that such an approach, which would have countries that were not yet ready take a slower track, would allow for the speedy implementation of the common currency.

The session, titled “Can Regional Economic Communities Work for Africa: Lessons from a Founding Father of ECOWAS” and moderated by former international newscaster Riz Khan, saw the former President commending the important progress made by ECOWAS toward achieving the objectives of its founders, including the implementation of the protocol on free movement and active interventions to address political issues in the region.

He paid tribute to the significant efforts of former Nigerian Head of State General Yakubu Gowon and former Presidents Gnassingbe Eyadema of Togo and Houphouet Boigny of Cote d’Ivoire for their roles in setting up the economic community.

Responding to a question, Chief Obasanjo said that education offered the surest pathway to addressing the challenge of poverty in West Africa. According to him, there should be free and compulsory basic education for all children in the countries.

Such free basic education should be complemented with a strong emphasis on agribusiness, which should cover the entire value chain, in order to foster employment and income generation for the populace, he added.

More than 100 speakers, including ministers of trade, central bank governors, academics, African and global trade development experts, and business leaders, spoke during the four days of the Annual General Meeting and related events, which focused on the theme “unlocking Africa’s trade potential”.