Ex-VP Sambo Cries Out Over Alleged Plans to Incriminate Him 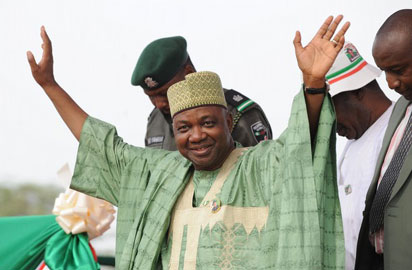 Ex-Vice President Namadi Sambo Saturday alerted the public on the clandestine move by the security agencies to implicate him.

He made the allegation over what he said were the repeated raids of his 1, Alimi Road, GRA, Kaduna by security agencies.

“The recent desperation exhibited by some security agencies in carrying out a raid on an unoccupied residence blocking all entry and exit points, in a commando-style and coming along with a bullion van speaks volumes of the clandestine intention of the security operatives, said Umar Sani, his spokesperson in a statement.

“The desperation of some of the security agencies is glaring going by the number of times such searches were conducted and still counting. We hope it is not a way to try to give a dog a bad name in order to hang it.”

“This raid brings to fifth, the number of times the residence was searched within a period of six months and on each occasion valuable fittings were deliberately destroyed.”

“It is therefore worrisome to note that the consistency with which the searches occurred and the intervals between them, portrays a desire of a fault-finding mission. We are apprehensive that a repeat of such episode will not be surprising if an incriminating object is planted in his residence in order to willfully and deliberately incriminate him.

“As the visit of the operatives was unscheduled, the reasons for the search were not specifically stated. However, the outcome of the search was made known. At the end of the whole exercise, the officers, who carried out the search were satisfied that nothing incriminating was found. As a law-abiding citizen, the former vice-president did not raise the alarm in the previous invasions in view of the fact that he has nothing to hide. The DSS has denied being part of the raid at Sambo’s residence.

DSSEFCCICPCNamadiNigeriaprobeSamboSecurity
Share
Subscribe to our newsletter
Sign up here to get the latest news, updates and special offers delivered directly to your inbox.
You can unsubscribe at any time