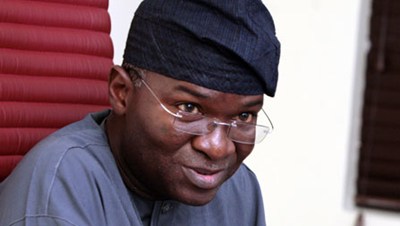 Fashola in a recent interview had disagreed with the practice where the legislative arm of government unilaterally alters the budget after putting members of the executive through budget defence sessions and committee hearings to the extent that some of the projects proposed would have become materially altered.

The minister had observed that it amounted to a waste of taxpayers’ money and an unnecessary distortion of orderly planning and development for lawmakers to unilaterally insert items not under the exclusive or concurrent lists of the constitution like boreholes and streetlights after putting government Ministries, Departments and Agencies through the process of budget defence.

With specific regard to the Ministry of Power, Works and Housing, Fashola listed the Lagos-Ibadan Expressway, the Bodo-Bonny road, the Kano-Maiduguri road, the Second Niger Bridge and the long-drawn Mambilla hydropower project, among others, as projects that the National Assembly materially altered their allocations in favour of boreholes and primary health care centres, which were never discussed during the ministerial budget defence.

In their responses, the Chairman, Senate Committee on Media and Public Affairs, Senator Abdullahi Usman; and the House of Representatives spokesperson, Abdulrazak Namdas, accused the minister of spreading half-truths and making fallacious statements.

They argued that Fashola should have known that the National Assembly only interfered with projects that had concession agreements and private sector funding components.

They also accused the minister of wanting to hold on to such projects in order that he would continue to award contracts.

However, while dismissing the allegations, Fashola said it was sad that the lawmakers would resort to name-calling without understanding the facts of what they were getting into.

Taking the projects, which the lawmakers chose to focus individually, the minister insisted that there was no subsisting concession agreement on the Lagos-Ibadan Expressway.

He noted that what the Infrastructure Concession Regulatory Commission had as a financing agreement from a consortium of banks was like a loan that would have to be paid back through budgetary provisions.

According to him, there was no fallacy or half-truth in the allegation that the allocation to the road was reduced, adding that the lawmakers admitted this and sought to rationalise it by a concession or financing arrangement that had failed to build the road since 2006.

The biggest momentum seen on the road was in 2016, the minister said.

In the case of the Second Niger Bridge, where one of the spokespersons of the National Assembly alleged that the fund provided in the 2016 budget was not spent and had to be returned, Fashola explained that this showed very stark and worrisome gaps in the knowledge of the spokesperson about the budget process he was addressing.

According to him, a budget is not cash, but an approval of estimates of expenditure to be financed by cash by the Ministry of Finance.

“The Ministry of Finance has not yet released any cash for the Second Niger Bridge, so no money was returned,” he stated.

He added that three phases of early works of piling and foundation were approved and financed by the previous government in the hope that a concession would finally be made, but this had yet to happen because the concessionaires had not been able to raise finance.

“The continuation of early works IV could not start in May 2016 when the budget was passed because of high water level in the River Niger in the rainy season. The contract was only approved by the Federal Executive Council in the first quarter of 2017 and the contractor is awaiting payment.”

Dismissing the allegation that his ministry was holding on to projects that could be funded through Public Private Partnership so that he could award contracts, Fashola said from day one of his assumption of office, he made it clear that his priority would be to finish as many of the several hundreds of projects that the ministry inherited, which had not been funded for close to three years.

He said if the spokesperson was in tune with the Public Procurement Law, he would realise that the minister had no unilateral power to award such contracts whose values run into billions of naira.

He observed that all the new projects presented to the Federal Executive Council for approval were either federal roads requested by state governments or those put in the budget by the legislators to service their constituencies.

Fashola said the focus on contracts by the spokesperson was probably a Freudian slip that revealed his mind-set and interests, when indeed he should be focused on developmental projects that would strengthen the economy.

On the N20bn provision in the ministry’s budget, which the lawmakers alleged that the minister failed to provide the details, Fashola said the spokesperson was hiding behind a finger.

He said it was a very basic principle of good planning to make provisions for unforeseen contingencies, adding that in the 2016 budget, a similar provision enabled the ministry to respond to the failures of the Tamburawa Bridge in Sokoto, the Ijora Bridge in Lagos and the Gada Hudu Bridge in Koto Karfe along the Abuja-Lokoja Expressway.

FasholaministryNASSNigeriapowerSenate
Share
Subscribe to our newsletter
Sign up here to get the latest news, updates and special offers delivered directly to your inbox.
You can unsubscribe at any time