Persecondnews reports that Buhari took a ride on the train with his host, Gov. Babajide Sanwo-Olu and other top government officials after the inauguration on the island. 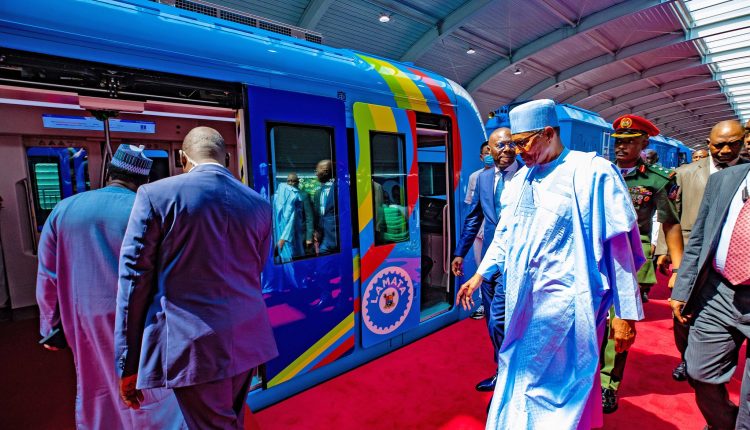 Fate on Tuesday brought President Muhammadu Buhari back to Lagos to inaugurate the state’s Blue Line rail project, about 39 years after his military administration of 1984 cancelled the project.

Persecondnews reports that Buhari took a ride on the train with his host, Gov. Babajide Sanwo-Olu and other top government officials after the inauguration on the island.

The also witnessed the signing of the contract for the second phase of the project between the Lagos State Government and the Messrs China Civil Engineering Construction Corporation (CCECC), the contractors.

The 13-km first phase covers five stations, while the second phase is 14km, spanning from Mile 2 to Okokomaiko area of the state.

Persecondnews recalls that in 1984 following an overthrow of the civilian administration of the late President Shehu Shagari, the Maj.Gen. Muhammadu Buhari-led military junta, cancelled the Lagos Metroline project.

The project was initiated by the late Gov. Lateef Jakande administration under the defunct Unity Party of Nigeria-led by the late sage, Chief Obafemi Awolowo, at a total cost of N700 million which was to be completed in two years.

Ironically, the contract was terminated in 1985, the year the rail project was meant to be delivered and the nation paid a heavy fine for this.

“We ultimately paid a heavy penalty, which could have been used to handle a substantial portion of the project,” said a professor of political science, Prof. Femi Otubanjo.

Speaking at the event, Sanwo-Olu expressed joy over the commissioning of the project, and pledged that the Red Line would be ready before the end of the president’s tenure in May.

Listing the benefits of the rail line, Sanwo-Olu said: “It would reduce travel time, it would improve the quality of life of our citizens, and would make Lagos one of the most resilient megacity, not only in Africa, but it would compete with other megacities in the world.”

Welcoming the president and the invited dignitaries to the event earlier, Lagos Deputy Governor, Dr Obafemi Hamzat, described the Blue Line rail as “most audacious” project to be funded by a subnational government in Africa.

“It is the most audacious project to be funded by a subnational in Africa,” he said, citing the multi-modal nature of transportation in Lagos.

“The people are the major reason why we embark on projects. It is the reason why our projects are human-centric.

“I want to thank all of those who have made this possible, from President Muhammadu Buhari who has created an enabling environment to ensure we can get this done.

“There is also Asiwaju Bola Ahmed Tinubu, who cannot but be spoken about enough- not speaking of him is like neglecting the beach while speaking of the ocean. I must appreciate Lagosians who beared with us in the face of the construction,” Hamzat said.

In his remarks, the Chinese Ambassador to Nigeria, Ciu Jianchun, said the Blue Line rail will help Lagos to generate more revenue.

“We believe that development holds the key of the Nations and I am happy that Lagos is rising. We have a saying in China that time is money. I am glad that with the blue rail line, Lagos can beat time and make more money.

“I believe that Nigeria and China can work together, we can achieve a lot more together, with the Nigeria China collaboration and cooperation, we can do a lot more,” Jianchun said.

In December 2022, it was recalled that Sanwo-Olu led members of his cabinet, the State House of Assembly, and journalists to take the first trip aboard the electric-powered Blue Line rail infrastructure, from the National Theatre Station to the station in Marina – marking the technical completion of the project.

The project, which is being constructed by Lagos Metropolitan Area Transport Authority (LAMATA), started in 2010 under the administration of Babatunde Fashola.

The rail line, which begins operations after further test running, is expected to move 250,000 passengers daily.

Gov. Sanwo-OluLagosPres. Buhari
Share
Subscribe to our newsletter
Sign up here to get the latest news, updates and special offers delivered directly to your inbox.
You can unsubscribe at any time