While some corpses were seen inside a vehicle waiting to be taken to the morgue soon after the attack, the authority has only confirmed one operative of the Nigerian Security and Civil Defence Corps dead. 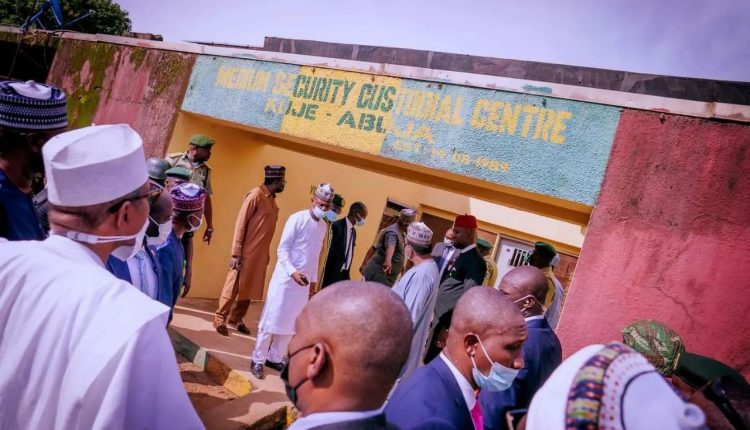 President Mohammadu Buhari has visited the Kuje Correctional Centre hours after the attack on the facility by some gunmen.

The President, who arrived at the facility on Wednesday at 3:30pm, left Kuje without speaking to the media.

Facts emerging from the attack on Kuje Correctional Service about 10:30pm on Tuesday indicate that over 600 inmates escaped from the detention facility with about 443 of them said to have been recaptured as at the time of filling this report.

While some corpses were seen inside a vehicle waiting to be taken to the morgue soon after the attack, the authority has only confirmed one operative of the Nigerian Security and Civil Defence Corps dead. 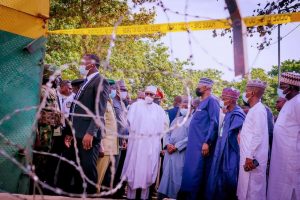 Persecondnews recalls that the suspended commander of the Police Intelligence Response Team DCP Abba Kyari is being detained at the Correctional Centre as at the time of attack.

Unconfirmed report said Abba Kyari who is facing trial for allegedly dealing on prohibited drugs may have remained in his cell after the attack by alleged Boko Haram terrorists.

The Minister of Interior, Mr Rauf Aregbesola, who visited the Kuje facility in the early hours of the day amidst tight security, declined to speak with newsmen at the scene but left in a hurry.

The Minister of the FCT, Mallam Mohammad Musa Bello also visited the scene and urged community leaders in the area to assist security operatives fish out the inmate who are still hiding in the community.

The Minister of Defence, Bashir Magashi, who earlier visited the facility before the President arrived, said none of the Boko Haram suspects detained in Kuje prison was yet to be recaptured as at time of his visit.

Addressing journalists after an assessment tour of the facility, the minister said:“The attack started around 10:30pm. They came in their numbers gained entrance into the prison and they released some of the inmates and which we are now following to see the kind of inmates that they have released.

“Very soon, we will give you the correct figure of the inmates that were taken. Aside that, we are trying to see what we can do to ensure that all escapees are returned back 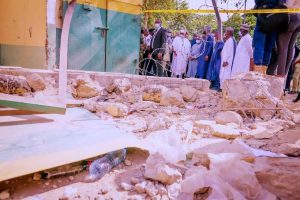 “The prison is accommodating about 994 inmates and over 600 escaped. Many people have been recaptured and brought back to the prison. Maybe by the close of the day, more will have been captured and returned.

“I think everything is under control. The people who came to do this activities from the records we believe they belong to a particular group.

“Most likely, they are Boko Haram members because we have sizable number of Boko Haram suspects in detention, and presently we cannot locate any of them.

“I think they are about 64 (Boko Haram suspect) in the prison and none of them now is available they have all escaped.”

The attack on the Kuje correctional facility came less than a year after  bandits invaded the Jos prison and freed many inmates.

So far, five prisons have been attacked in the last 18 months across Nigeria. They include Jos, Oyo, Kabba, and Owerri Correctional facilities.

Kuje Area Council has been notorious for series of kidnaping for ransom reported in Abuja in the last two years.

Persecondnews reports that the incident led to the deployment of military personnel to the Kuje facility and military checkpoints along the road linking airport road to Kuje.

FECNigerian Correctional Centre (prison) in KujePres. Buhari
Share
Subscribe to our newsletter
Sign up here to get the latest news, updates and special offers delivered directly to your inbox.
You can unsubscribe at any time