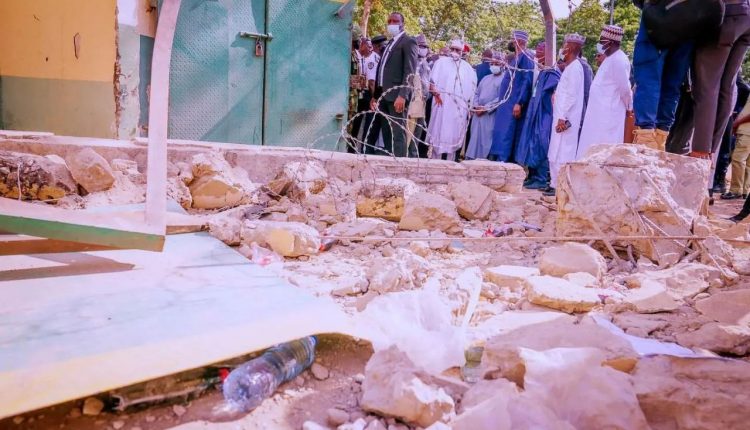 Residents of the Kuje community seem not to have got over the violent attack by suspected terrorists on the Kuje Medium Custodial Centre in the Federal Capital Territory on Tuesday.

Persecondnews recalls that a gang of terrorists on Tuesday night attacked the Kuje Medium Custodial Centre at 10p.m with explosives and other sophisticated weapons, freeing over 600 inmates including some of their members, who are inmates.

According to the Permanent Secretary of the Ministry of Interior, Dr Shuaib Belgore, over 600 of the inmates fled the prison during the attack with about 300  recaptured and 300 still at large.

Belgore disclosed that those behind the attack were Boko Haram terrorists, who came specifically for their members held in custody.

A member of the vigilante group in the community who simply gave his name as Isaiah, told persecondnews that he and the other members of his group had come for their usual security work when the terrorists attacked the Kuje facility.

Recounting his experience, he said: “We had come out not to long to start our usual vigilante work and were still trying to settle when he heard a loud sound like bomb and the ground shook.

“At first we thought it was those people who blast rocks with dynamite, but on a second thought we were confused because they have stopped blasting that late for security reasons and the intensity of the blast was too much to be a rock blast.

“We were still wondering what caused the blast when the second and third blasts went off quickly, followed immediately by heavy gunshots.

“We immediately knew we were under attack, but this time not from the usual bandits that terrorize the community once in while. We immediately went into hiding. The gunshots were so intense and lasted for more two hours if not three hours.

“The next thing we saw was a crowd of people running from the direction of the prison facility into different directions. The facility was under attack for more than three hours.

“Shortly after, I saw the attackers ride back on several motorcycles numbering over 50, with some of them carrying passengers which I think may be some of the prison inmates. The were shooting while riding off.”

Narrating the atmosphere in Kuje community after the attack, Isaiah said most of the residents are still scared to come out of their houses after the attack, as they locked themselves indoors, even with the presence of heavy security in the community.

According to him, many believe that some of the prison inmates who escaped during the attack may still be lurking around the community.

It was gathered that Nyame, Lawal and Kyari were among those who decided not to escape as 90 percent of the inmates were reported to have escaped during the attack.

Meanwhile, Nigerians have taken to the  various social media as usual to express shock over the attack.

@KandariaAhmed tweeted: “Terrorists have tested Nigeria &found her wanting;a state that cannot defend itself or its people. Perhaps we can now stop pretending about the efficacy of the fight against terror, own the failures& accept we are at war!These truths may enable the right response.”

@OnyiiKaluUmex tweeted: “Kuje prison has been attacked for the umpteenth time under President Buhari’s watch.Terrorists have been shooting for over 1hr without any trace of resistance. But make FG hear say youths wan protest, police go kit up like Power Rangers enter armoured tanks

@_SirWilliam tweeted: I hope Nigerians understand what it means for terrorists to invade the Federal Capital, Attack a secure government asset and free their members 8 months to a national election. Once again, well done to Class of 2015, you guys finished work.”

@OgbeniDipo tweeted: “Kuje is inside Abuja. How did terrorists drive through Gwagwalada, or Madalla/Suleja axis before getting to Kuje? Whatever it is, the Minister of Defence should be sacked immediately because this is a terrible security breach, and a disgrace on the federal government.”

Among those who also reacted on Twitter are former presidential aide, Reno Omokri and co-convener of BringBackOurGirls, Aisha Yesufu.

“Unknown Gunmen have gotten to Abuja? And they helped Boko Haram members escape from Kuje prison? What has Nigeria become? Is anyone in charge of this country? And when Gov Ortom said bandits could overrun Aso Rock and Abuja on Channels, he was almost yanked off air!

“One would have expected the Buhari admin to have by now directed all media in Nigeria to compulsorily broadcast the faces of all ‘escaped’ Boko Haram terrorists from the Kuje prison break. Innocent Nigerians in Abuja should be made aware of who these people are,” @renoomokri tweeted.

@AishaYesufu wrote: “How many are we going to sacrifice for Buhari’s remaining months in office? There is zero security in Nigeria. What we have is illusion of security. 2023 election is choice between life and death not whose turn to rule. Who’s the next victim?”

Dr Shuaib BelgoreFCT-AbujaKujeKuje Medium Custodial Centre
Share
Subscribe to our newsletter
Sign up here to get the latest news, updates and special offers delivered directly to your inbox.
You can unsubscribe at any time