...No immigration record of Kanu’s departure from our country, says Kenyan govt. 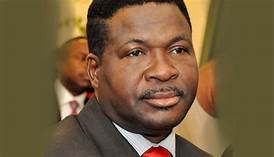 Human rights lawyer, Chief Mike Ozekhome(SAN) has alleged that the sight of the detained leader of the Indigenous People of Biafra (IPOB), Nnamdi Kanu, is deteriorating.

Ozekhome, who is the lead counsel to Kanu, made the claim at the resumed trial of the pro-Biafran independence leader at the Federal High Court, Abuja, on Wednesday.

According to the lead counsel, the detained IPOB leader may go blind if nothing is urgently done to restore his sight.

The senior lawyer, who recently took over the defence team of the embattled IPOB leader, said his client’s pair of eyeglasses was confiscated in 2015, when he was initially arrested by the Department of State Services (DSS), following his return to Nigeria from the United Kingdom.

He equally told the court that the new pair that Kanu bought was also seized from him during his extraordinary rendition from Kenya.

Ozekhome said: “My lord, since 2015, his glasses were taken from him.

“The one he wore before his extraordinary rendition from Kenya was also taken from him. Till now, he does not have glasses to wear and his sight is deteriorating.

“My Lord we do not want the defendant to go blind, that is why we have decided to bring it to the attention of the court.”

He further noted that despite an express order of the court for his client to have a change of clothing, the DSS had refused to allow the IPOB leader change.

He alleged that the security agency refused to allow Kanu to receive new clothes that were brought to him by his younger brother.

“My Lord will still see the defendant in the same uniform which my lord warned against in the last proceedings.

“It will be recalled that they had on that day alleged that he said that he preferred to wear the same cloth because it is designers.

“However, since that time, the younger brother of the defendant, his lawyer and sister have gone three times with materials for him to change, but they refused collecting them.

“So bad was it that Ejiofor had to call the Director of Legal Services and complained to him.

“But since then, nothing has been done. They have not allowed him to change his clothes,” Ozekhome said.

In her ruling, Justice Binta Nyako, promised to $look into the matter”.

Meanwhile, a latest affidavit filed by the Kenyan Government in defence of the suit filed by Kanu in Kenya has asserted that there was no immigration record of Kanu’s departure from Kenya after his last arrival on May 12, 2021.

A Special Counsel to the detained IPOB leader, Aloy Ejimakor, said that the Kenyan Government had filed a document in court to show that there was no immigration record of Kanu’s departure from Kenya after his arrival to the country on May 12, 2021.

A release jointly issued by Ejimakor and the IPOB Leader’s brother, Kanunta Kanu, argued that the position of the Kenyan government has made the circumstances under which Kanu “disappeared” from Kenya a more grievous offence, claiming that serious consequences await all those involved in the action.

“It is pertinent to note that this Affidavit, having been “drawn up and filed” by the Attorney-General of Kenya is the clearest official confirmation yet from the government of Kenya that what happened to Nnamdi Kanu in Kenya amounts to a crime, both in Nigeria, Kenya and under international law.

“With this latest development, Kanu’s ordeal in Kenya has turned a new corner where domestic and international criminal indictments will lie against the persons that directly or indirectly participated in this high crime.

” It has gone beyond extraordinary rendition,” Ejimakor said.

IPOBIPOB Leader Nnamdi Kanu
Share
Subscribe to our newsletter
Sign up here to get the latest news, updates and special offers delivered directly to your inbox.
You can unsubscribe at any time