"Unarguably, Emefiele’s coming on board as CBN Governor first in June 2014 and his re-appointment in June 2019, brought hope and calm to an economy that witnessed two recessions and suffered the scourge of the COVID-19 pandemic under his watch." 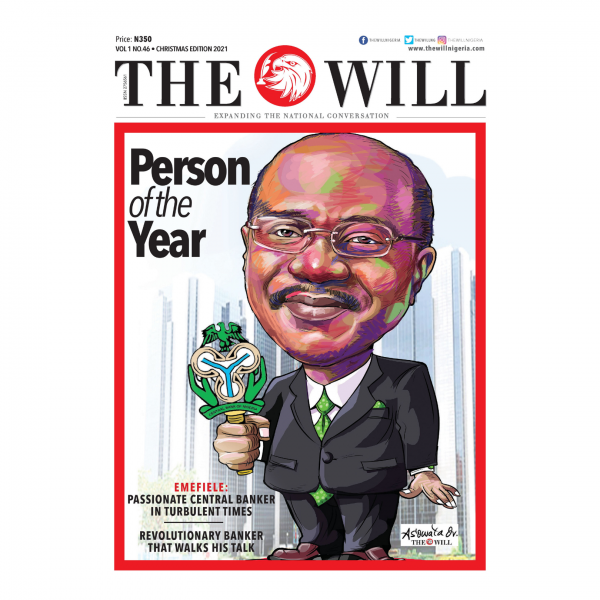 THEWILL NEWSPAPER has named the Governor, Central Bank of Nigeria (CBN), Mr. Godwin Emefiele, as its Person of the Year for 2021.

The announcement was made on the double cover stories of newspaper’s CHRISTMAS EDITION, captioned “Emefiele: Passionate Central Banker in Turbulent Times” and “Godwin Emefiele: Revolutionary Banker That Walks His Talk.”

It is currently available on newsstands nationwide, the newspaper’s multiple digital channels as well as on international newspaper digital publishing platforms, Issuu and Pressreader.

“The reason is simple. There is an organic relationship between the Central Bank and the economy of a nation; the bank’s policies have far-reaching implications on the people’s wealth-creating abilities and standard of living.

“It is therefore a matter, of course, that Emefiele is a household name to different people for different reasons.

“At one time, he was applauded by proponents of the bank’s policy initiatives. At the other, he was lambasted by critics for what they perceive as deliberate moves to worsen an already bad situation.

“But this passionate Central Banker has been consistent in his actions, which underlies the fact that he means well for the nation and the economy with his boundless belief in people-oriented policies.

“Unarguably, Emefiele’s coming on board as CBN Governor first in June 2014 and his re-appointment in June 2019, brought hope and calm to an economy that witnessed two recessions and suffered the scourge of the COVID-19 pandemic under his watch.”

“Upon his first appointment, Emefiele unveiled his 10-point agenda, which spelt out, unambiguously, his plan to make the CBN more people-focused.

“He left no one in doubt as to the priority of his policy thrust – development finance, to create jobs and attain financial stability. He said he was committed to creating “a Central Bank that is professional, apolitical and people-focused,” which “spends its energies on building a resilient financial system that can serve the growth and development needs of our beloved country.”

Noting that he has not relented efforts at ensuring economic growth and financial stability through strategic policies that impact meaningfully on the economy, the newspaper said the bank’s development finance interventions had created over 7 million jobs.

The CBN intervention programmes, introduced under the leadership of Emefiele, were born out of a market failure and other critical issues within the nation’s economic space.

Currently, the CBN has 37 intervention funds targeted at stimulating the economy and addressing the issue of unemployment.

In spite of scathing criticism from some analysts, who argued that the CBN governor had acquired renewed energy to push the bank beyond its monetary policy mandate by delving into issues beyond what the CBN Act (2007) provided, Emefiele and his team remained committed to the patriotic goal of ensuring economic stability through the bank’s several intervention programmes.

THEWILL, however, maintained that though this may not be understood and appreciated by those Emefiele’s policies do not favour, “The real test of individuals in positions of authority anywhere in the world – whether presidents or prime ministers, heads of corporations or educational institutions – is not how much of a smooth ride they had while in office but in surmounting the rough patches along the way.”

It added: “Godwin Ifeanyi Emefiele has had more than his fair share of both natural and man-made problems as CBN governor in the last couple of years. Has he survived it? A resounding yes is the answer from THEWILL, which is why today, we give him a standing ovation by naming him our Person of the Year.”

Emefiele, fondly called Meffi by his close friends, was born on August 4, 1961 in Lagos, though his parents are from Agbor in Delta State who lived and worked in the littoral state. He began his primary and secondary education in Lagos and then found himself in an out-of-state school for his degree programme at the University of Nigeria, Nsukka in Enugu State.

His meeting with Jim Ovia afterwards and eventually taking up an appointment with Zenith Bank is the kind of success story heads of departments of B and F plump for and routinely recount to their wards in business schools.

In other words, the success story of Zenith will never be complete without the prominent role Emefiele played in it and as anyone would imagine, success stories never hide, they are in plain sight to see.

CBNEmefieleNigeriaTHEWILL
Share
Subscribe to our newsletter
Sign up here to get the latest news, updates and special offers delivered directly to your inbox.
You can unsubscribe at any time