The abduction took place in the wee hours of Friday, according to reports.

About 10 days ago, 27 students and staff members were kidnapped at Government Science College, Kagara, Niger State.

Both Niger State and federal government have been negotiating the release of the abductees. 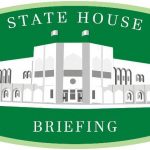