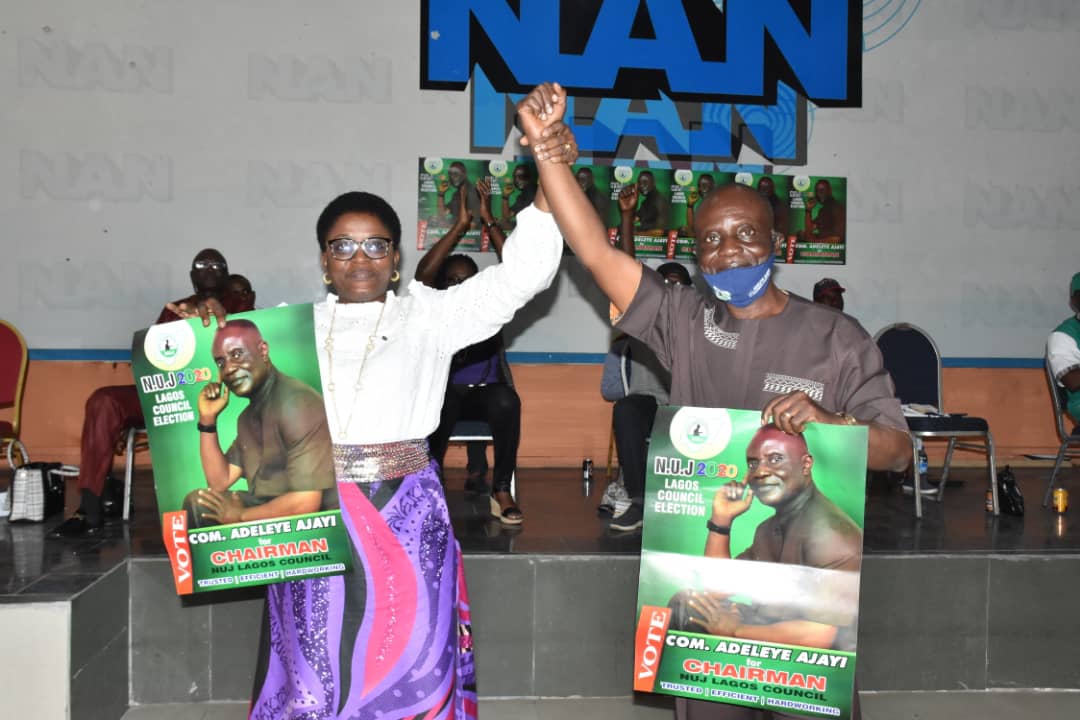 A whiff of fresh air blew on the concourse of media professionals in the nation’s media hub, Lagos State, as they elected a two-time challenger, Adeleye Ajayi of the News Agency of Nigeria (NAN) as the Chairman.

An upbeat Ajayi, a Deputy Editor-in-Chief and one-time President of Maritime Reporters Association of Nigeria (MARAN), is to lead the Nigeria Union of Journalists (NUJ), Lagos State Council, in the next three years, having trounced the incumbent, Dr Qasim Akinreti, who polled a dismal 68 votes as against his overwhelming 370 votes.

LTV 8 and Radio Lagos Complex on Lateef Jakande road was swarmed with hundreds of gaily dressed journalists, who had filed out in orderly manner in the full glare of security men to cast their votes.

Persecondnews reports that some retired senior journalists, editors, officials of the NUJ National Secretariat and the Nigeria Labour Congress (NLC) also witnessed the process which was peaceful and rancor-free.

Akinreti had sneaked out of the venue after casting his vote in the twice postponed and once aborted election orchestrated by him in addition last minute failed attempt to get court injunction to stay the course.

He had told newsmen that Ajayi should be wary of those who surround him, saying it was his pitfall.

As soon as Ajayi and other contestants roared to victory the pen pushers burst into roistering sessions of celebration.

Announcing the poll results, Mr Cosmos Oni, the NUJ Returning Officer, said Ajayi scored a total of 370 votes to defeat down Akinreti of the Voice of Nigeria (VON) who got 68 votes.

Mr Tunde Olalere of Lagos State Ministry of Information garnered a record 381 votes to push down Mr Raymond Tedunjaiye of New Nigerian Newspaper, who secured 53 votes, to be elected the Secretary. …..

Administering the oath of office on the new Executive Council, Oni, who also doubles as the NUJ Vice-President, Zone B, urged them to unite all the aggrieved members in a bid to move the union forward.

“I have a message from the National body that you should not lose focus nor be distracted. Now that you have won, try and united all members and work together for the progress of the council.

“Today is a fantastic day and we are happy to have conducted a peaceful election. I have to thank all Journalists in Lagos State for allowing this election to go on peacefully. The election is free, fair and credible,” he said, urging other contestants to support the new officers.

He declared: “There is no winner, there is no loser; no victor no vanquished. They have all won the election.  The winners should use all their wisdom to bring all aggrieved members together.

“Lagos Council is the largest in the country, it cannot be toyed with.  It is a sport, those who did not win should come and be part of the progress and contribute their quota.’’

Mr Silva Okereke, the National Trustee of the NUJ commended the peaceful conduct of journalists before, during and after the poll, describing as successful.

Okereke said the winners should be magnanimous in victory and shun winners take-all syndrome, urging the losers to eschew bitterness.

Mrs Agnes Sessi, the Chairman, Nigerian Labour Congress, Lagos State, who applauded the peaceful conduct of journalists in the election, said that the nation could learn a lot from this election.

Sessi urged the new executive to render selfless service to the members and get themselves acquainted on labour issues, saying “uneasy lies the head that wears the crown.’’

The Chairman, Ajayi, who had ensorcelled the enthusiastic crowd with his modesty and composure, described his victory as God ordained and promised to fulfill all promises made during his electioneering to return the union back on track.

“We thank everyone here who voted for us based on trust because they believe we can lift the council from its present doldrums. We salute those who shared our dreams, our aspirations, our vision and our goals.

“In the course of our electioneering, we made some promises which we assure you we shall fulfill within a short time we assume office. Let us put this election behind us. We are all winners and we intend to carry everyone along.

“The incoming administration will give priority to welfare of our members and build this into our budget,” he said.

Ajayi appealed to members to put their differences behind them and work assiduously with the new team for the progress of the council and the journalism profession.

In his reaction to Ajayi’s victory, the Publisher of Persecondnews, Mr Femi Soneye, said: “Wow…congratulations, wish him all the best.’’

Lagos StateNLCNUJ
Share
Subscribe to our newsletter
Sign up here to get the latest news, updates and special offers delivered directly to your inbox.
You can unsubscribe at any time

Amid dismal performance, Super Eagles down in FIFA ranking