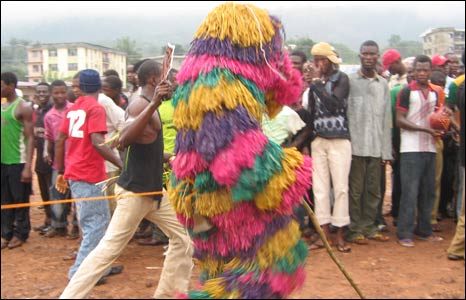 For violating the federal and state governments’ directives on social distancing and public gatherings, a masquerader who came out in the intense heat of the sun, causing people to mass around him, has been arrested by the police in Ogun State, Southwest Nigeria.

Following a tip-off by some members of the public, police swooped on Ijeja area of Abeokuta, the state capital and apprehended the masquerader while scores of his followers scarpered at the sight of the armed security men.

Government had before the lockdown announced some precautionary measures and regulations to prevent the spread of coronavirus in the state and across the country including social distancing.

It prohibited an assembly of people that is more than 20 either in churches or mosques and other social events.

Persecondnews recalls that President Muhammadu Buhari had in a broadcast on Sunday clamped a total lockdown on Abuja, Lagos and Ogun States as a result of the COVID-19 prevalence and discovery  of new cases.

In Yoruba parlance, masqueraders (egungun) are masked or costumed figures believed to be connected to the ancestors and are “spirits’’ from heaven.

“The masquerader before he was arrested had challenged the authority of the law enforcement agents and threatened to deal with them if they insisted on dispersing his followers.’’

Contacted, the State Police spokesman, DSP Abimbola Oyeyemi,  confirmed the masquerader’s arrest, saying the gathering was held to celebrate the traditional masqueraders’ festival in the area.

He said the gathering had caused a scare and fear of a possible spread of COVID-19 among residents.

“Upon the report, policemen from the Ibara Division moved to the area and warned the people to disperse, but the masquerader confronted the policemen and threatened to deal with them if they insisted on dispersing his followers.

“The masquerader was subsequently arrested and taken to the station, where he was warned to be law-abiding before he was released to a reliable surety,” he said.

COVID-19Dapo AbiodunNCDCNigeria PoliceOgun state
Share
Subscribe to our newsletter
Sign up here to get the latest news, updates and special offers delivered directly to your inbox.
You can unsubscribe at any time