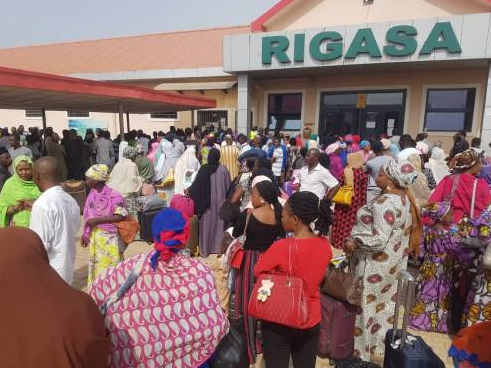 It was a Sunday morning, and I needed to catch-up with the 10 a.m train from Kaduna to Abuja. I left for the Rigasa train station, Kaduna, as early as 7 a.m in other to be at the station between 7:30 a.m and 8 a.m to be able to get ticket. One would wonder, why leave as early as 7 a.m to catch up a 10 a.m train, when it’s just ticket I was going to purchase. What they don’t know is that getting a ticket at Rigasa train station is a Herculean task, and early arrival does not even a guarantee getting a ticket.

Due to the increased level of kidnapping and banditry along the Abuja-Kaduna road, many travelers who ply that axis are forced to travel by train instead of using the road. Because of this recent development, the number of travelers that use the train has also increased rapidly, which translates to more queues and more struggle to get tickets.

Barely three years after the launch of the first high-speed rail in Nigeria, the system had already taken a few blows to its functionality, and ticketing was one of the many anomalies. Commuters had high expectations that it was going to revamp traveling on that route, but it did only for a short while. 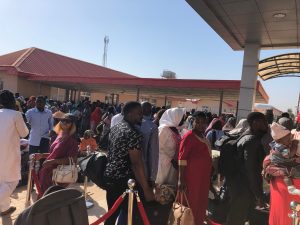 On reaching the station, what struck this reporter was the crowd and rowdiness. The number of passengers at the station, were far more than the train carrying capacity. Instead of seeing passengers queuing in front of the ticket counter, there were so many bags and boxes lined up in place of people on queue, until officials start selling tickets. The ticket officials usually hoard the tickets and start selling an hour before the take off time, thereby subjecting passengers to unnecessary hardship. They sell the tickets for only 30 minutes and stop, of which very few passengers get after so much struggling, pushing and even exchange of blows. They stop selling under the pretext that tickets are “finished”, and give passengers the option of buying “standing“ tickets; Both tickets cost the same price. With this act, they end up creating a chaotic scene as passengers are later seen running helter-skelter with some even making phone calls, all in a bid to obtain the ticket, at any amount.

Checks by Persecond news at the station, revealed that officials at the station resort to this style of selling tickets because they are heavily involved in ticket hoarding and racketeering. This is their own way of making money, as they sell the tickets at inflated rates to those who can afford it. Economy or regular tickets which is supposed to sell between N1, 300 to N1, 500 will be sold for N2, 000, while first class which goes for N3,000 will be sold for N4,000. 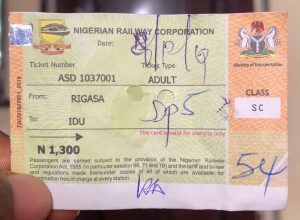 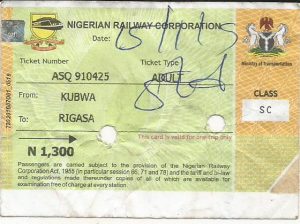 Also, those who have tickets without seat numbers; standing tickets, have the option of standing for the two-hour journey. They usually stand on the walk way and lean on the chairs for support, or squeeze into the spaces between the carriages by the toilets, thereby making the train overcrowded. This is a choice many are happy to make, rather than risk being kidnapped on the dangerous Abuja-Kaduna road. 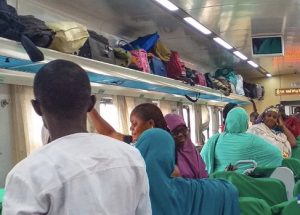 According to reports, the “standing” tickets are unofficial and will not be recorded in the account book, so whose pocket does the money go into? This is the question on the lips of many passengers.

In an exclusive interview with Persecond news, some passengers expressed their displeasure at the hardship they have to go through traveling by train from Kaduna to Abuja.

“I got to this train station at exactly 7 a.m this morning with my wife, so I could get tickets for the both of us. At 9:35 a.m, I still hadn’t gotten tickets, as the tickets “finished” before it got to my turn. They sold the tickets for just 30 minutes and stopped. They always do this and it’s really frustrating. I was thinking of what to do, When I saw an official of this train station walk up to a man and handed him about five tickets. These were thesame tickets they said had “finished”.

“I saw about three more others giving people tickets secretly and collecting money. I had to approach one of them and begged him. He said he’ll give me regular for N2,000 instead of the normal N1,500, if I’m willing to buy at that price, of which I obliged. I had to pay N4,000 for the two tickets instead N3,000. To my greatest surprise, he had so many tickets in his pocket. With the way things are going in this station, they will soon stop selling tickets at the ticket counter. If not for the security situation on the Abuja Kaduna road, I don’t think anyone will want to go through this stress. How can one be begging for services with his or her money? it’s annoying,” a public servant, Shola Adeyemi, lamented.

Also speaking, another passenger, a post graduate student of the Nigerian Defence Academy (NDA), Lilian Opara, who travelled to Kaduna for her final exams, could not hide her joy of not going through this exasperating ordeal every weekend anymore, as she lamented how she has suffered uncountable situations to get tickets.

“I’m so happy, because finally this annoying situation of hunting for ticket is over. I’m done with my final exams and won’t be traveling to Kaduna every weekend for lectures anymore. The thought of having to go to the train station early to get ticket is sickening. I face thesame thing in both Kubwa and this Rigasa train station, but at least Kubwa station is better because if you go early, you’re very sure of getting a sitting ticket, unlike Rigasa station where coming early doesn’t guarantee one getting ticket.

“On several occasions I had to buy from the ticket racketeers, because I couldn’t struggle for ticket anymore. The ticket situation has made traveling by train really stressful and tiring. The government really has to do something about this before it gets out of hand; that is if it hasn’t,” she explained.

Another passenger, who simply identified himself as Ibro, said: “I don’t think Nigeria is ready to run an effective railway system, because you won’t see this type of thing happening in other parts of the world. They need to learn how it is run in other countries of the world. Both the Nigerian Railway Corporation and their staff need reformation. Almost all their staff are very rude.”

Meanwhile, in order to curtail the situation, and make commuters travel with ease by train, Nigerians have called on the government to introduce online ticket booking method.

How safe is kaduna-Abuja train?

The security situation at the Rigasa train station is another thing of serious concern, especially owing to the security situation in the state. Despite the increased number of passengers at the station, the management has failed to increase the number of security personals at the station. After the purchase of a ticket, passengers will wait till when it is boarding time before they will be allowed to pass the security checks hurriedly, with lots of disorganization. The metal detectors and cabinet x-Ray machines at the station are not working, and there are no physical security checks, which shows that the management is not interested in the safety of its passengers.

Efforts by Persecond news to get the reaction of Rigasa Station Manger as at the time of filing this report proved futile, as the reporter was denied access to the Manager. 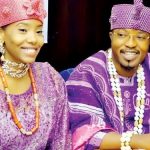