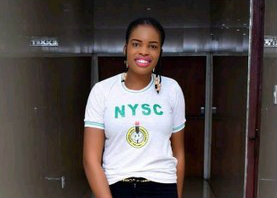 A youth corps member, Miss Kemisola Adeniran, who died during an election-related assignment in Oyo State, has been posthumously rewarded by the Independent National Electoral Commission (INEC) as it presented a cheque of N1.9 million to her family.

The cheque was presented to the deceased’s sister, Mrs Folasade Adeyemi, at INEC office in Ibadan.

Until her death, Adeniran, who served in Ona-Ara Local Government Area of Oyo State, lost her life in a road accident sometime in February this year while returning home from INEC training for the election.

Dr Mutiu Agboke, the State Resident Electoral Commissioner (REC), said that the commission had acted in line with its life insurance policy for election officials, including ad hoc personnel before and during elections.

He said: “On behalf of the commission and entire INEC staff in Oyo State, I wish to express my profound deep regret for the loss of our illustrious daughter/corps member.

“We also express the sincere condolence of the commission to the family over this irreparable loss.

“Though, the commission’s insurance policy makes provision for both permanent and ad hoc staff, nothing can be counted worthy for the life lost.

“This presentation of token is just to cushion the effect of this irreparable loss to the deceased family.’’

Agboke promised that INEC would continue to honour its part of the Memorandum of Understanding (MoU) with NYSC.

The State Coordinator of NYSC, Mrs Eniola Ambekemo, commended INEC for fulfilling its agreement on the corps member in terms of insurance.

She described deceased’s death as very unfortunate, saying she would have passed out of service with her colleagues in October.

Adeyemi, the deceased’s sister who received the cheque on behalf of the family, thanked INEC and NYSC for standing by the family.