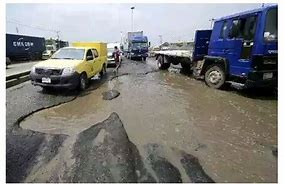 Nigerians have continued to react to a statement credited to the Works and Housing Minister, Mr Babatunde Fashola, that Nigerian roads are not as bad as being portrayed by the media and the people.

The statement was greeted with dismay and disappointment just as it drew flak from a cross-section of Nigerians.

They said the comment showed that Fashola had lost touch with reality and had exposed the political elite that they fly most times and barely travel by road within the country.

Fashola, a former Lagos State governor, had said in Abuja on Wednesday at a media interaction after Federal Executive Council meeting: “The roads are not as bad as they are often portrayed. I know that this is going to be your headline, but the roads are not that bad.

A politician and media administrator, Mr Bayo Onanuga, said it was imperative for President Muhammadu Buhari to order his ministers to stop flying within Nigeria for one year.

“He (the President) himself should routinely endeavour to use the roads to really understand the dilapidation of the roads and why the N260 billion capital vote for 2020 budget is simply laughable.

“Minister of Works Raji Fashola predicted rightly that his claim that Nigerian roads ‘are not so bad’ will hit the headlines.

“I am at a loss as to why he made the claim in the first instance and further puzzled whether our `hardworking’ minister travels on the roads that he is supposed to take care of,’’ he said.

Onanuga, a former Managing Director of News Agency of Nigeria (NAN), challenged Fashola to make his phone number and email available to Nigerians, saying he will be shocked how he will be inundated by complaints about the parlous state of our many critical roads in all the geographical zones.

“Travelling from Lagos to Abuja for instance is hell. Fashola should ask NTA cameramen to follow the route, to and fro and he will be palpably shocked.

“Minna to Abuja is so close (to the Minister in Abuja). Let Fashola and his officials go on a visit to IBB and Abdulsalami at the Hill Top. Ore-Benin has gone bad again. People are complaining everyday and everywhere about the poor state of the roads.

“I am from Ijebu-Ode, just 100kms from Lagos. In almost one year, I have not been to my town, because going from Lekki is now unthinkable because of the bad roads, even from Lekki to Epe.

“Epe to Ijebu-Ode is horrible. Epe to Ketu is equally horrible and Ketu to Omu-Ijebu-Ode is bad. Worst of all, if I decided to go through Ketu-Itoikin-Ijebu-Ode, I will need to buy a new car. All these roads are, unfortunately, federal roads,’’ Onanuaga, publisher of PM News, an online newspaper, said.

To another respondent simply identified as Mr Obinna Charles, the minister is not living in the same country with them.

“Kidnapping in Nigeria is exaggerated – #AudioVP Osinbajo. There’s no hunger in the land – Minister of Agric Nanono. Nigerian roads not as bad as portrayed – Fashola. Obviously these people are living in a different Nigeria. Such a disconnection from reality.”

“This man’s head has been corrupted by the allure of ministerial office. Take a look at Oju-Otukpo federal road, Oju-Awajir Road and Otukpo-Enugu road alone,’’ twitted James Ibechi.

Also reacting, Mr Stephen Osazuwa, said: “How is he supposed to know? Does he ply any of those roads? His primary route which is Lagos-Abuja, he does via air, so what is he talking about.

“Fashola has now developed a reputation for talking nonsense and outright rubbish all the time.’’

The Chairman, Infrastructure Development Committee of the Manufacturers Association of Nigeria (MAN), Mr Ibrahim Usman, said: “I think the minister is being economical with the truth. The roads are terrible.

“Take for instance the Biu to Gombe road that took one-and-a-half hours in the past to ply, now it takes four hours to get from Biu to Gombe. The luck we have is that Boko Haram has not stuck on that road.

On his part, the Director General, Nigeria Employers’ Consultative Association (NECA), Mr Timothy Olawale, sympathized with the minister, saying he might not be plying the same roads as other Nigerians.

Olawale cited the Ibadan-Oyo-Ogbomoso road as a very good example of a terrible Nigerian road.

“The huge craters along the Oyo-Ogbomoso road can swallow vehicles. These are roads that were manageable before but they have gone completely bad. People spend hours on that expressway because of tankers that fall into the craters.

“The sad thing is that the government is not doing any kind of palliative work on the roads,” the NECA boss also said.

BuhariFasholaNigeriaRoads
Share
Subscribe to our newsletter
Sign up here to get the latest news, updates and special offers delivered directly to your inbox.
You can unsubscribe at any time

Osinbajo in Niger Republic to represent Buhari at ECOWAS summit