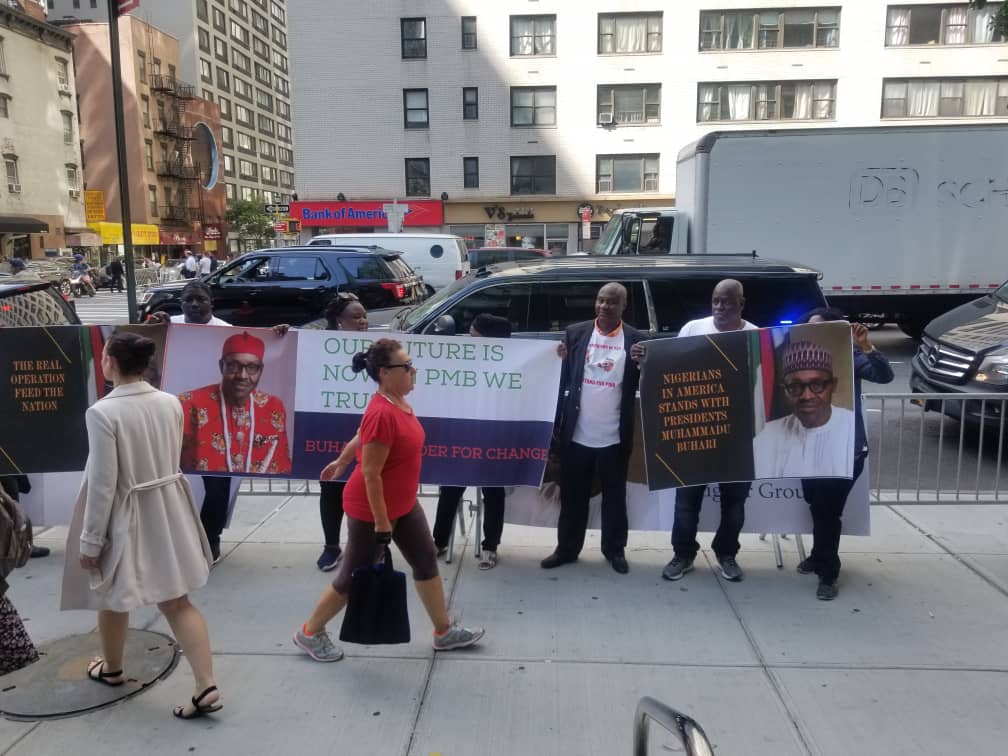 Dozens of demonstrators gathered in front of the Nigerian Consulate in New-York on Tuesday to send a message: President Muhammadu Buhari is welcome here.

The supporters praised the president for his handling of the country, calling for Nigerians to join hands in taking it to the next level.

The protesters wearing “Buhari trusted and tested” T-Shirts, were full of praises for his administration.

“We want to show the president that we care,” said Jide Okuneye, leader of the group.

Mr. Okuneye tackled those criticizing President Muhammadu Buhari’s governance style, declaring he is fully in charge and in control of his administration.

Mr. Okuneye, whose group was at the Nigerian consulate to counter protests by supporters of the detained presidential candidate of the African Action Congres, Omoyele Sowore, said Nigeria was not isolated from problems happening across the globe but that the President has shown leadership and capacity to tackle them.

According to him, Nigeria closure of the  border with Benin more than 30 days ago, followed by partial closures of its northern border to Niger has contrary to expectations yielded positive results.

He added that before now the effect of the closure of border would have been felt but for Buhari’s policy of  operation grow what you eat.

He said: “Buhari knows what he is doing, is the best man for the job. Nigerians should be more patient because the problems of Nigeria cannot be solved in a twinkle of an eye, we must follow due process in tackling them. Before now we cannot boost of feeding ourselves but the borders in Nigeria have been closed for more than a month and we have not heard that the nation has collapsed.

“There is no two ways about it, he is the best thing that has happened to Nigeria.”

Meanwhile, Supporters of Sowore have described Buhari’s administration as intolerant and incapable of tackling the numerous problems facing the nation.

The group who were joined by Opeyemi Sowore, the wife of detained presidential candidate of AAC, demanded that he be set free.

Opeyemi has spoken out against the continued detention of her husband by the Department of State Services.

The group chanted different slogans which include: Free Sowore now; We are tired of killings; stop the kidnapping; we in America want to go home but no place to call home, we tired of medical tourism, freedom of speech is guaranteed under the constitution among others. 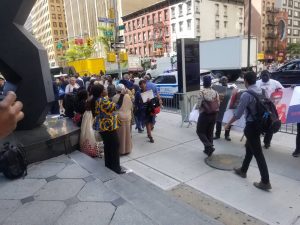 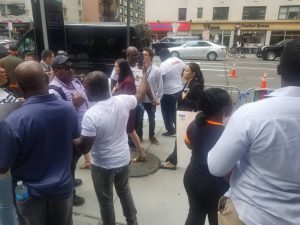 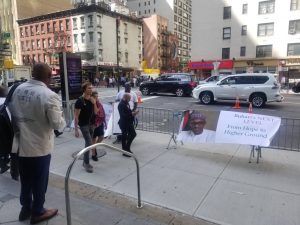 Muhammadu BuhariNew-YorkNigerian ConsulateOmoyele SoworeOpeyemi Sowore
Share
Subscribe to our newsletter
Sign up here to get the latest news, updates and special offers delivered directly to your inbox.
You can unsubscribe at any time