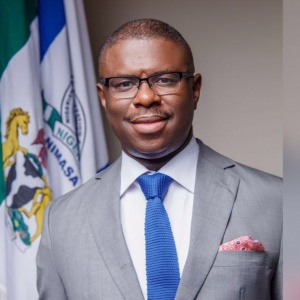 The Director General of Nigerian Maritime Administration and Safety Agency, Dakuku Peterside Monday directly urged Rivers Governor Nyesom Wike to resolve disputes with Moslems peacefully over the alleged demolition of a Mosque in the state.

” This is no time for grandstanding and blame game. All religions are free to practice in the state, he said.

” Some of the comments being circulated around could have been avoided if both parties had mutual understanding and trust. The governor must move quickly to douse the flames and offer reassuring words, that is why he is the governor.”

” We don’t need fan embers of discord. I have many Muslim friends in Rivers state and Nigeria at large. We will continue to remain friends; we should not allow religion to divide us at any point, Rivers is home for all!

My brother, Governor Wike should immediately meet with the Muslim community and explain the government’s position.”

Governor Wike last week denied the Mosque demolition saying it was the work of propagandist.

“It is most unfortunate that fickle minded persons will claim that a mosque was demolished at this place, when no mosque existed here. The story was concocted by mischief makers to score cheap points, Wike said.

“The government gave them notice not to do anything on the land. But they went ahead with the illegal foundation and the relevant agency stopped them.

“Why would we want to bring down any mosque, when there are other mosques across the state? What is the special interest on this one?”

On August 20, the Rainbow Town Central Mosque located at the Trans-Amadi area of Port Harcourt,the Rivers State capital, was reported to have been demolished by the state government.

Social media videos of the demolition were supported by claims from the secretary of the mosque, Aliu Sidiq.

Sidiq would further state that what was demolished was not a completed structure but the foundation of a budding property.

Investigations by Per Second News revealed that there was a demolition authorized by the Rivers State government, but this demolition order wasn’t issued because a mosque was about to spring up from the site.

What was demolished was not a completed property or a Mosque.

The developers were going to erect a structure on a disputed parcel of land and Wike and his team stopped further development of whatever it was going to be—whether that was going to be a church, school, office or mosque.

The government considered the property development a contravention.

When Wike says“there was no mosque here,” he is right because technically, no mosque was brought down.

What was brought down was a  pile of blocks on a construction site.

DakukuMosqueRiversWike
Share
Subscribe to our newsletter
Sign up here to get the latest news, updates and special offers delivered directly to your inbox.
You can unsubscribe at any time