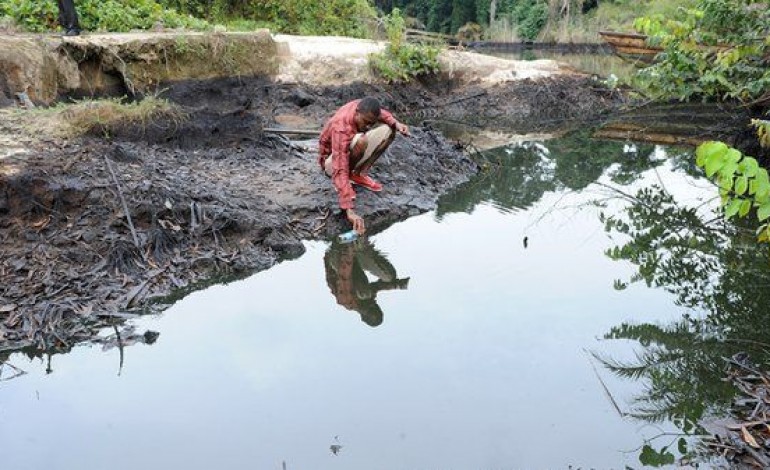 The Environmental Rights Action/Friends of the Earth Nigeria (ERA/FoEN), has decried the Nigerian government lip-service to the cleanup of Ogoniland after four years of President Muhammadu Buhari’s administration.
This comes Eight years after the release of the United Nations Environmental Programme (UNEP) assessment on Ogoniland report to the Nigerian government.
Speaking at a press briefing on Tuesday in Abuja, The Executive Director, ERA/FoEN, Dr. Godwin Ojo, stated that President Buhari promised to implement the report to the letter and went ahead to pledge $10 million as take off grant.
He said: “The report was released in 2011 and was handed over to former President, Dr. Goodluck Jonathan. From 2011 to the exit of his administration, no meaningful action was taken on implementing the recommendations.
“At the inception of this administration in 2015, President Buhari also promised to implement the report to the letter and went forward to pledge $10 million as take off grant.”
Further speaking, Dr. Ojo stated that the Ogoni environmental remediation and cleanup process should set the standards for how a proper remediation and cleanup operation should be conducted in Nigeria, however the Hydrocarbon Pollution Restoration Project (HYPREP) lacks capacity to clean up Ogoni.
“Although $177 million has been released for the cleanup since 2018, HYPREP lacks the capacity to spend as it has no feasible work plan for the funds received, and because it lacks capacity it is not prepared to receive the yearly $200 million for 2019 cleanup.
“There is fundamental deviation by HYPREP from the recommendations. The absence of Integrated Contaminated Soil Management Centre, as well as Centre of Excellence to train Ogonis and raise the needed manpower for the clean up has been sidelined.
“Some of the contractors currently engaged by HYPREP for the Ogoni cleanup were the same contractors whose cleanup processes were declared by the UNEP report as being below par and exacerbated the environmental devastation of Ogoniland.
“Checks at the Corporate Affairs Commission by independent researchers and media reports showed that some of the contractors engaged by HYPREP did not have the requisite experience or expertise to undertake cleanup and remediation.”
The Executive Director, ERA/FoEN, urged the federal government to call HYPREP to order, halt the deviation and implement the UNEP report following the detailed recommendation of the UN agency.
He also called on the National Assembly to carry out its responsibility and conduct oversight function on the cleanup, with a view to tracking the fund released and ensure that 2019 outstanding $200 million is paid promptly.
Dr. Ojo further urged the the federal government to commence the cleanup of the polluted region by the establishment of $100 billion rehabilitation fund for the entire Niger Delta.
Environmental Rights Action (ERA) is the Nigerian chapter of Friends of the Earth International (FoEI). It is the co-ordinating NGO in Africa for Oilwatch International, the global South network of groups concerned about the effects of oil on the environment of people who live in oil-bearing regions.
Don't Miss

Oct 1, 2022
Dr. Godwin OjoERAFoENFoENIHYPREPMohammadu BuhariOgonilandUNEP
Share
Subscribe to our newsletter
Sign up here to get the latest news, updates and special offers delivered directly to your inbox.
You can unsubscribe at any time

We have extreme faith in NNPC- NEITI