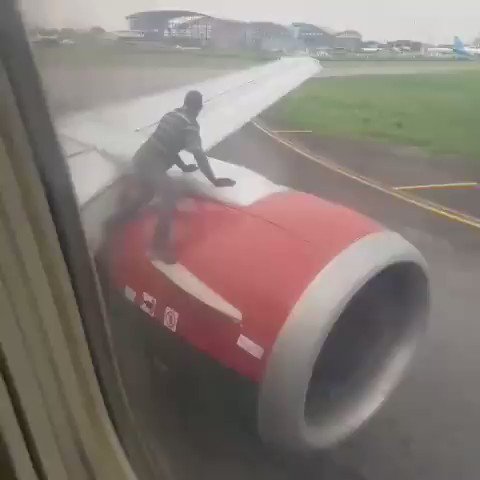 A man has filmed climbing on to the wing of a passenger aircraft before takeoff at the Lagos airport is from the Republic of Niger, Police said on Saturday.

The 32-year-old  has been identified as Adamu, according to spokesperson for the Command, DSP Joseph Alabi.

In dramatic footage taken from inside the aircraft the man was seen hauling himself up from the rim of the jet engine onto the wing of the Boeing 737 plane and then walking towards the cabin.

The incident occurred on an Azman Air flight in Lagos. The aircraft was reportedly at a holding bay expecting clearance for take-off when the man was seen climbing onto the wing by passengers causing panic.

Following the development, FAAN placed on indefinite suspension, the Aviation Security Unit heads who were on duty when the incident occurred.

Liverpool ranked third in world ahead of Barcelona and Real Madrid