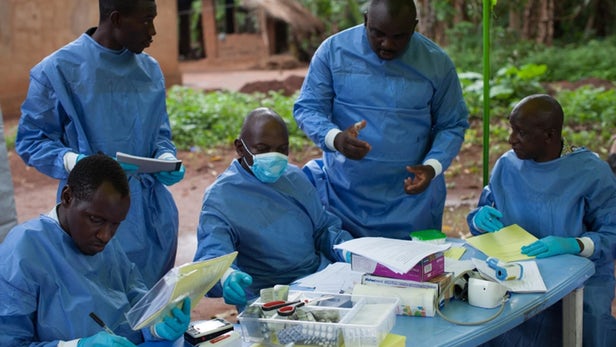 Share
The Federal Government has described the message circulating in the social media purporting a positive case of Ebola Virus Disease (EVD) in the Country, as false.

Speaking on Wednesday in his office, the Permanent Secretary, Federal Ministry of Health (FMOH), Mr. Abdullaziz Mashi Abdullahi, called on members of the public to disregard the rumour, and discourage the circulation of any unverified information.

According to a statement issued by the Director, Media and Public Relations, FMOH, Boade Akinola, he said this kind of information could cause harm to innocent people and create unnecessary panic among the citizens.

He assured that since the reports of outbreak of EVD in the Democratic Republic of Congo, heightened surveillance had been on-going at the various points of entry by officials of the Port Health Services division of the Ministry to prevent importation into Nigeria.

He said: “To this effect, every sick passenger has been properly screened and I can say categorically that none of the patients screened has tested positive for Ebola or any deadly disease.’’

The Permanent Secretary noted that in line with WHO’s guidelines, a recent preliminary risk assessment conducted by the Nigeria Ebola Preparedness team, coordinated by the Nigeria Centre for Disease Control (NCDC), indicated that the overall risk of importation of EVD to Nigeria from Democratic Republic of Congo (DRC) and Uganda is low.

Abdullahi assured that the Nigerian Government remained fully committed, while working closely with the WHO, State Ministries of Health, partners and all other stakeholders, to protect the health of all Nigerians.

‘’However, necessary protocols are being followed in line with international Health Regulations,” he said.

Ebola
Share
Subscribe to our newsletter
Sign up here to get the latest news, updates and special offers delivered directly to your inbox.
You can unsubscribe at any time

My cabinet will be appointed based on Merit, says Abiodun