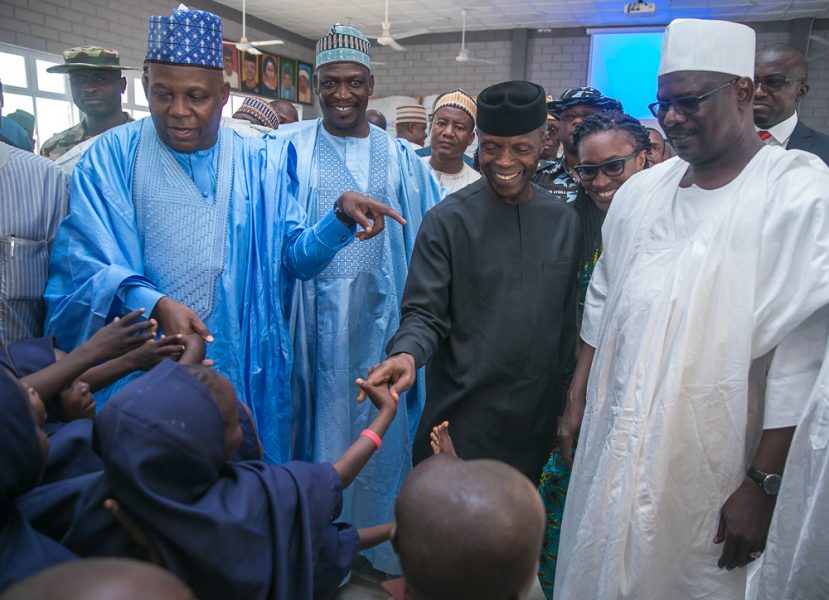 Standing amid piles of debris and destroyed infrastructures, Vice President Yemi Osinbajo on Tuesday promised a sustained national effort to rebuild terrorist-ravaged  Borno state and other parts of the North-East.

The VP disclosed that following the signing into law of the North-East Development Commission (NEDC) Act, the rebuilding of communities devastated by the Boko Haram insurgency in the North-East will receive priority attention in the Next Level of the Buhari administration

“Recently Mr. President signed into law the North-East Development Commission (NEDC) Act. We now have a law which backs the vehicle for the renewed development and rehabilitation of the North-East.

“The concerns over the rebuilding of the North-East remain possibly the most important challenge that we have as a government and we want to assure you that it remains on the front burner of the Federal Government.

“And with the commitment of those who have been appointed to run the affairs of the NEDC, we are bound to see a great deal of improvement in the pace of rehabilitation and construction of the North-East, especially Borno which is the worst hit by the insurgency, he also stated at the Palace of the Shehu of Borno, His Eminence, Abubakar Ibn Umar Garbai El-Kanemi.

“Your eminence can be at rest that we will do our very best and continue to give all of our support and help to rebuild Borno.”

On his part, the Shehu of Borno, His Eminence, Abubakar Ibn Umar Garbai El-Kanemi, thanked the Vice President for the visit and appealed more slots to be allotted to indigenes of the state in recruitments into Federal agencies and parastatals.

Earlier, Governor Shettima thanked the Vice President for his concern for the people of Borno which, according to him, had been demonstrated by his frequent visits to the state and the construction of a school for children orphaned by the Boko Haram insurgency.

BornoBuhariNEDCNorth-EastOsinbajoShettima
Share
Subscribe to our newsletter
Sign up here to get the latest news, updates and special offers delivered directly to your inbox.
You can unsubscribe at any time