El-Rufai’s feud with Tinubu intensifies, says I have no apologies on how to defeat Lagos godfather 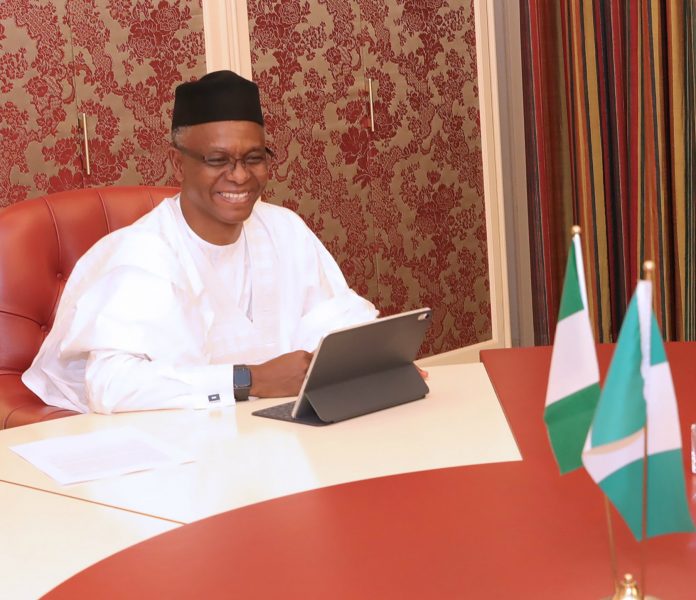 The Governor of Kaduna State, Mallam Nasir El-Rufai, has dramatically escalated his feud with former Lagos governor, Bola Ahmed Tinubu, by saying he has no apologies after his remarks on how to defeat political godfathers in Lagos state.

” I have no apologies, I don’t apologize for my views, he said Monday during a visit to President Muhammadu Buhari.

“I don’t know if he is the god-father of Lagos, it’s up to him to say that. What I know for sure is that we have retired god-fathers in Kaduna and I have told those that asked me the question that ‘there are six million registered voters in Lagos but only one million voted,’ in the last election. So there are five million people that you can bring into the electoral play ground and you can defeat anyone if you work hard. It’s hard work, it’s four years. That is what I said and if anyone feels offended by that, that is his business or her business.”

The Kaduna State Governor has a week ago in Ikoyi, Lagos, at an event organised by the Bridge Club tagged, “An evening with His Excellency Mallam Nasir El-Rufai, Governor of Kaduna State,” said that he defeated and retired four political godfathers in Kaduna State, saying the feat could be replicated anywhere, including Lagos State.

On his dispute with Tinubu, the governor said: “there is no dispute between me and anyone in the APC, the APC is one family, I don’t dispute with my own party. They may dispute with me but I don’t. I made comments in Lagos about how to retire god-fathers, it’s a template that we have used in Kaduna and it has worked. If anybody thinks he is a god-father, the template may apply to him but I am not in dispute with anyone. I expressed my views firmly and very clearly, there is no human being that I am afraid to express my views on, and when I am ready to express my views specifically on a particular name then I will do so but i haven’t. I made a general statement but people have gone in to overdrive, creating fake news, abusing me and so on.  I am thick-skin, I can take the abuse and I will wait for my time when I want to….”

On his relationship with Tinubu, El-Rufai said, “We are in the same party, we get along very well as I know.”

Asked if he wants Lagos to follow his template on retirement of god-fathers, El-Rufai said: “I have not recommendations to Lagos, I am the governor of Kaduna State, I know Kaduna politics pretty well and I played my role in my party towards the success of the party. I have not recommendation for anyone, I am just saying, if I am asked a question and I gave an answer, anyone that feels offended by the answer, it’s his own business.  I have no apologies, I don’t apologize for my views. My views are thought-out and I put them there. I don’t have to explain anything to anyone. This is a democracy, and in a democratic space, there must be room for people to express their views. You can disagree, you can abuse me if you don’t like my views but that is it.”

Though the statement by the Kaduna governor seems to be the peak of the pair’s feud, clashes between El rufai and Tinubu date back to the beginning of the APC party and during the 2015 presidential campaign, fed by a variety of personal, political and policy disagreements.

A top member of the Buhari cabinet told Per Second News that El-Rufai was a pain in the neck and party stalwarts were glad when he signified interest to contest for Kaduna governor. He further revealed that the southwest group supported him with the aim of getting rid of him from party affairs, rather when he became governor he has been causing problems and till date fosters division.

El RufaiKadunaLagosTinubu
Share
Subscribe to our newsletter
Sign up here to get the latest news, updates and special offers delivered directly to your inbox.
You can unsubscribe at any time

Buhari inauguration to be low-key affair