Buhari to New NEDC Board: Focus on Reconstructing Damaged Infrastructure

President Muhammadu Buhari on Wednesday, inaugurated the North-East Development Commission (NEDC),  with a charge that members of the board should collectively change the narative of the situation in the region through commitment to service delivery.

The President urged the board to shift focus from humanitarian services to developmental and infrastructural projects such as reconstruction of roads, houses, educational institutions and business premises destroyed by boko haram.

“You shall as a matter of urgency, conduct comprehensive survey of all States in the zone to determine the reconstruction and rehabilitation needs of all the socio-economic sectors of the zone and develope an intervention based on the outcome of your assessment.”

The President added: “The Commission is charged with the responsibility of among other things, receiving and managing funds allocated byte Federal Government of Nigeria and donors for the resettlement of rehabilitation, integration and construction of roads, houses and business premises of victims of insurgency as well as checking the menace of poverty, illiteracy, ecological problems, and other related environmental and developmental challenges in the North-eastern States.

“Develope policies and implementation guidelines for immediate intervention of the development of the zone, institute a strong mechanism for effective and efficient coordination of all the stake holders, local and international activities, starting by taking over all federally funded activities, projects and programmes as well as structures and logistics assets that the organisations utilise.

“In order to avoid duplication of efforts and waste of scarce resources, you shall be the focal organisation to access, coordinate, harmonise and report on all the intervention programmes and initiatives that the Federal government or any of its Ministries are involved in the region. You must therefore constantly liaise with the relevant federal Ministries, Departments and Agencies, States and other developmental partners for the implementation of all programmes and initiatives and proper utilization of funds released for intervention in the zone.

“It is therefore the expectation of this government and people of the zone that you will rapidly and systematically set to work and address all areas of your mandate in a fair and equitable manner.”

The inauguration took place before the commencement of the Federal Executive Council (FEC) meeting.

This is even as he said that  N10 billion take off grant to the commission has already captured in the 2019 budget.

The President, who urged the board members to exercise patience and tolerance in the discharge of their duties, however, said he had no doubt that members of the board would meet the yearnings and aspirations of the people given their public service records.

The commission had last month presented a budget of N55 billion to the Senate out of which the grant of N10 billion is for humanitarian interventions.

Buhari had in January sent the nominees names to the Senate for confirmation by the senate.

The Senate had last month confirmed a retired army major-general, Paul Tarfa, as chairman of the Commission. 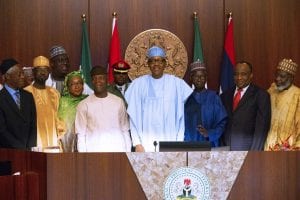 The Senate, in October 2016, passed the bill for the establishment of the North East Development Commission to coordinate the rebuilding of the insurgency-ravaged North East region of Nigeria.

President Buhari signed into law the establishment of the North East Development Commission (NEDC) in October 2017. The NEDC’s mission is to lead the reconstruction and development of Nigeria’s northeast.

BuhariNorth East Development Commission
Share
Subscribe to our newsletter
Sign up here to get the latest news, updates and special offers delivered directly to your inbox.
You can unsubscribe at any time