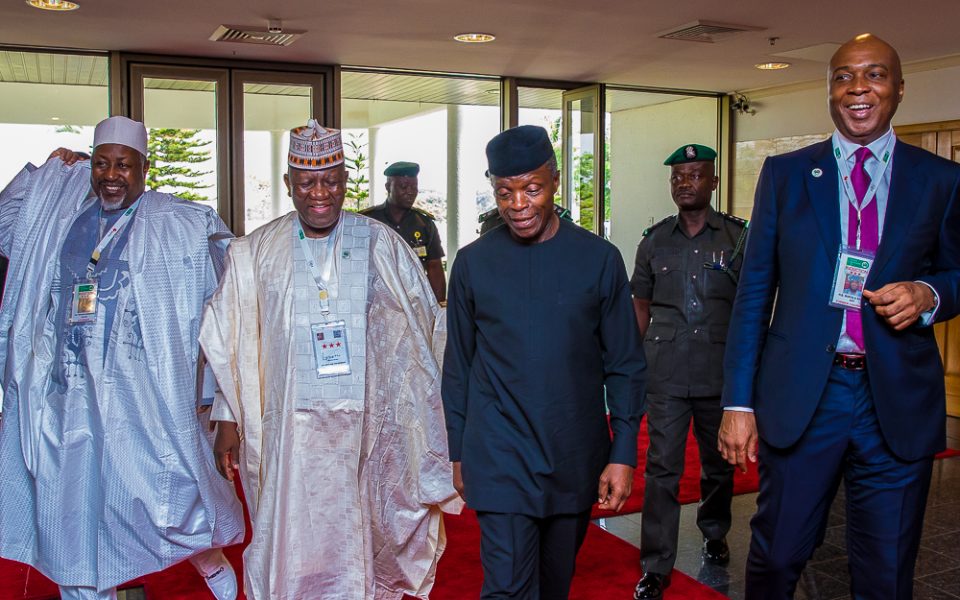 Vice President, Yemi Osinbajo, has urged the incoming governors to think out side the box to boost their states Internally Generated Revenue (IGR) to enable them meet the demands of the N30,000 new minimum wage.

Osinbajo who said no complaint about paucity of funds from the governors and newly elected ones is new under the sun, said that the Muhammadu Buhari administration has in the past three years, intervened through loans, bailouts and Paris Club refunds to the tune of well over N1.1trillion.

“This represents the highest amount of Federal Government’s extra statutory allocations and interventions to States in Nigeria’s history and we are proud to say that there were no discriminations along party lines.”

Osinabajo has therefore asked governors to boost Internally Generated Revenue (IGR) in the next four years to reduce poverty in their state.

He said the consequences of boosting states IGR will mitigate the challenges of malnutrition, illiteracy and out of school children.

The Vice President added that the Federal Government stands ready to embark on historic all-party cooperation to better the lives of all citizens.

“We must confront the problem, not merely by hoping that the Federal Government can do more, because that may not necessarily offer much hope. Already, our deficit is close to N2 trillion, while debt service to revenue is somewhere in the order of 54 percent

“States must in the next few years, earn more in IGR. We must more effectively collect VAT and increase our agricultural output, work with the Federal Government to make broadband infrastructure available all over the country, so our young people anywhere in the country can do jobs from anywhere in the world, from their villages in any corner of Nigeria.

“If a State is charging for right-of-way from communications companies and is hindering the laying of cables and other broadband infrastructure as an IGR measure, permit me to say that that will be penny wise and pound foolish. To tap into the millions of jobs in technology and other services that a country like India, for example, has tapped into, requires broadband infrastructure across the country.

“There is no other way of doing that except by dropping the idea that we can benefit on just the laying of cables and providing infrastructure. We must as a whole, allow a situation where broadband infrastructure is available everywhere. All the governors at the National Economic Council have all agreed on a pathway to make this happen.”

VP Osinbajo
Share
Subscribe to our newsletter
Sign up here to get the latest news, updates and special offers delivered directly to your inbox.
You can unsubscribe at any time

Awosika To Governors: Never Be Ashamed Of Seeking Help Beyond Your States

38 months salary arrears: I’m not corrupt – Kogi Gov, says ‘I have been prudent