The  Senior Special Assistant to the President on Political Matters, Hon  Gideon Samani on Saturday said President Muhammadu Buhari will defeat the candidate of the Peoples Democratic Party (PDP), Atiku Abubakar in the next Saturday’s presidential election in the Niger Delta region.

Samani posited that the achievement recorded under the President Buhari-led administration are enough to ensure that Mr President gets reelected next week Saturday.

Samani, who spoke alongside the leader of the Delta State chapter of the APC, Olorogun O’tega Emerhor, noted that with the current support President Buhari command in the region particularly in Delta State, Mr President’s victory is sure in the election.

They spoke at the inauguration of 4000 Buhari Canvassers for the re-election of Buhari by the Emerhor-led Mainstream Delta APC at the Grand Hotel Asaba, where they warned that Nigeria must never be return to the dark days of the PDP which brought the country to her kneels.

While commending Emerhor for organising the 4000 Buhari Canvassers, he urged the canvassers to take the re-election campaign of Buhari to every home in the state to ensure that APC Presidential candidate defeat his  opponent in the forthcoming poll.

He said; “I thank the Organizers and canvassers for organising this door to door campaign in support of Buhari. We have a president that is very reliable and dependable. I want to say that Olorogun O’tega Emerhor have been so antagonized and blackmailed because of the Buhari agenda since 2014, but he never relented.

” With what I have seen today in Delta State especially put together by Emerhor and the Mainstream Delta APC, Buhari will defeat Atiku. I am very sure that Buhari will score over 400,000 votes in next Saturday election. Buhari has worked and he would continue to work for the common good of all Nigerians unlike what PDP did in 16 years.

On his part, Olorogun Emerhor said “Deltans are here for a single mission of re-electing President Buhari for second term come February 16th.

“we have just six days more to Campaign. If you look at the Delta in 2015, the PDP wrote results for the Delta APC and gave us (APC) 50, 000 votes. But this time it can never work. Buhari will win Delta State and Niger Delta squarely.

“We will use all the chairmen and supervisors to flood Delta state with Buhari campaign to get a minimum of 400, 000 votes from the 4000 canvassers. We don’t care what other people are doing but we must stand up to be counted and we have given this as a must do; and we will provide all canvassers everything needed to do the job including branded new cars for the door to door Campaign to make people know that Delta State belongs to Buhari. Therefore, we vow to win Delta State for Buhari come February 16th.”

Also speaking, the Wife of the Minister for State for Agricultural, Mrs. Susan Lokpobri, said appealed to Delta State women to vote for Buhari and the APC in the elections, saying that future of their children are more secured under another Buhari-led government. 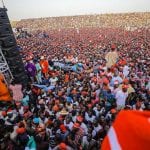