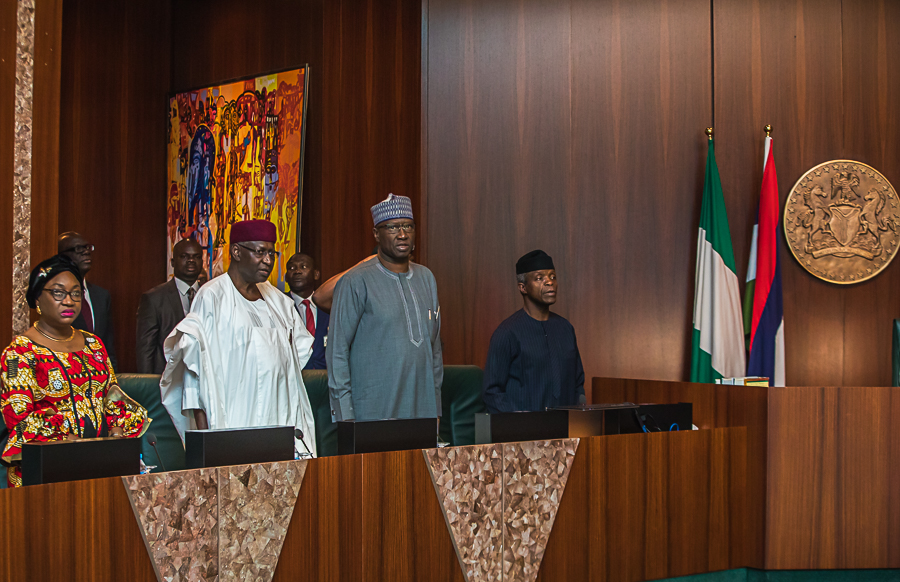 The Federal Executive Council, presided over by Vice President Yemi Osinbajo, has approved additional N1.6 billion as cost variation for the completion of Oweto bridge along the Oshegudu – Oweto road, linking Benue and Nasarawa states.

It has also approved N551.8 million for the construction of national freight office in Jibia, Katsina State.

The Minister of Power, Works and Housing, Babatunde Fashola, and his Transportation counterpart, Rotimi Ameachi, disclosed this when they briefed State House Correspondents on the outcome of the Council’s meeting held at the Presidential Villa, Abuja, on Wednesday.

According to Fashola, the project when completed would greatly ease the stress usually experienced by motorists plying the road.

He said, “We had only one memorandum and it was just a cost review memorandum really; to approve cost variations on Oshegudu-Oweto road. That road, as you might know, links the Loko-Oweto road, which is now substantially completed. The Oshegudu-Oweto road links the road to that bridge on the Benue side that helps connect Nasarawa from the Loko side to Benue.

“The importance of the Loko-Oweto road, which we have substantially now completed is that it is the bridge that links the North and South of Nigeria. Unlike the old Niger Bridge and the Second Niger Bridge, which link the East and the West, and linking the bridge reduces journey time from that part of the country and the eastern part of Nigeria, especially people who link through Makurdi, Enugu and all of that coming to Abuja, it would reduce their journey time by a couple of about few days that it currently takes.

“So, the revision for that contract was N1.6 billion extra because the contract was awarded using 2010 rates and the contractor asked for review to cushion cost and naira depreciations and council approved that.

The contract is on site working and he would feel comforted now that at least his rates has been improved and expect that his certificate would be paid.

Amaechi said, the national freight office is usually located at border post and Jibia is between Katsina state and Niger Republic.

On Lagos – Ibadan rail project, the minister expressed the hope that the project would be completed by June/July 2019

“We believe that by next year, we will begin to encourage those who transport by trucks between Lagos and Ibadan to use the rail.

“We believe that before the end of June, we will start running from January but, we may not be able to carry enough cargo, we will be able to do that by June/July.

“At that point, most of the trucks carrying cargo going to Ibadan must be on the rail so, that we can save the Lagos/Ibadan road.”

Speaking on preparation for the end of the year, Fashola assured that FERMA was doing its level best. “They are part of our end of year team. For us in the Ministry of Power, Works and Housing, end of year means so many things; it means heavy commuter activities, it means heavy cargo, also, in the ministry of my colleague, Transport and Aviation, passenger movement, goods, so, it is a pressure cooker time. Many people trying to share limited resources.

“So, what have done in Works? We have met with FRSC, we have met with FERMA and we have apportioned responsibilities of roads that FERMA will repair nationwide. They have that list. The MD should be able to provide that information.

@The FRSC have also earmarked routes where they would patrol. They have issued guideline for passenger behavior. We don’t want people who have no training in motor vehicle use, in essence, unlicensed and uncertified drivers must stay off the federal highway. We have given them the mandate because we want people to arrive safely.

“We have identified 53 major corridors across the country where our contractors have road construction but also bad portions, so Lokoja-Benin-Auchi is one of those sections and a couple of others, and the agreement we have reached with our contractors, they will maintain working gangs for one and a half month period, till January 19 when things normalize. Our men will be working to ease movement nationwide.

“On the transport side, one of the things we have agreed is that all the directors have been deployed to their zones. None of the Controllers in going on leave till the end of January 19. So, this is a special operation because of the retreats we have been having and planning.

“We have also predicted power demand nationwide, where the movement will go, so, power sector is also preparing to ensure that broken feeders, and all of those little things that constrain the distribution end can be dealt with in order to improve the experience because we know that weather is changing, temperatures are rising, people need more cold water, more fan and also the festive demand of the time. So, this is a well-planned ember month period for us. We have planned for the worst, we are hoping for the best and we hope we can deliver a better experience for commuters this year again, compared to last year – improved journey time even while construction is going on, improved energy access even while the power work is going on, making it better every day. So that is the picture.”

FG approves additional N1.6bn  for Loko-Oweto road
Share
Subscribe to our newsletter
Sign up here to get the latest news, updates and special offers delivered directly to your inbox.
You can unsubscribe at any time