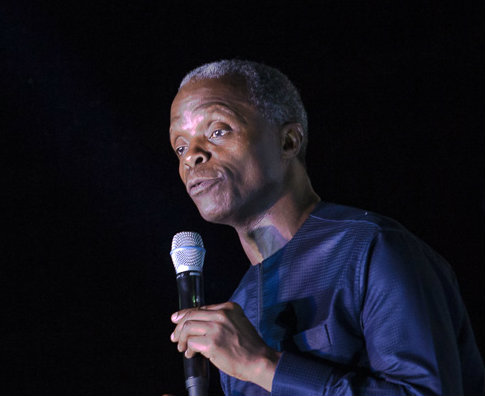 Share
The recent report by the House of Representatives Committee on Emergency and Disaster Preparedness is part of a grand plan by the opposition within and outside the All Progressives Congress (APC) to damage the integrity capital of the Vice President, Professor Yemi Osinbajo, ahead of the 2019 and 2023 presidential elections.

The plot to portray the vice president as having deliberately committed questionable infractions in the approval of N5.8 billion intervention funding in the northeast for the internally displaced persons, as learnt, was perfected to, overall, cause a collateral damage to the re-election bid of President Muhammadu Buhari.

Osinbajo is considered very strategic to the victory of the APC presidential ticket in the Southwest.

It was gathered that a two-pronged approach has been targeted at discounting Osinbajo’s credibility ahead of the 2019 presidential election and, if the strategy failed and the Buhari/Osinbajo ticket won the election, the second approach would be to sustain the smear campaign with a view to ensuring that he (Osinbajo) is not in a good stead to succeed Buhari in 2023. The successor may still come from the southwest zone.

If Buhari wins the 2019 presidential election, he would be vacating the prime position for the southern part of the country to produce a successor in 2023. The southwest will have elements from the southeast and south-south zones to contend with for the APC’s presidential ticket.

The plot to stop Osinbajo in 2023 in the event that Buhari wins the 2019 presidential election with him as the running mate, as gathered, has thus begun in earnest.

The vice president’s charm offensive to millions of Nigerian market women and traders through tradermoni, other empowerment initiatives and his physical visits to the markets has unsettled the forces that are not comfortable with him and the popularity he is acquiring through the interventions.

Osinbajo’s visits to the markets and grassroots are considered to be the icings on the cake of his capacity to preside over the affairs of the nation, which has done in acting capacity to the approbation of Nigerians.

Besides, a source said that despite all manner of alleged financial malfeasance against some top officials of the administration, President Buhari and Vice President Osinbajo have continued to maintain a clean bill of health as finger could not be pointed at them as having directly or indirectly authorized any of the infractions.

The approved N5.8 billion, which was in line with such emergency approvals as supported by the Public Procurement Act, was reportedly approved and released by the relevant government ministries, departments and agencies about middle of 2017 when the Vice President acted as President in exercise of full powers of the office.

According to a source, despite the fact that the opposition forces knew that that it was an emergency approval supported by extant laws, they decided to encourage investigation into it by the House of Representatives in order to publicise it through generation of negative headlines and stories that would portray the vice president in a bad light.

The source said that forces who were uncomfortable with the growing popularity of the vice president and who believed that his integrity capital and amiable persona would sway massive votes especially in the Southwest zone to the presidential ticket of the APC decided to activate the smear campaign.

Feelers from the Presidency indicated that the vice president is not perturbed by the report by the House of Representatives because he acted in the circumstance in the national interest and not in personal interest.

It was learnt that the details of the approval and disbursement to the beneficiary government agencies and further expenditures of the same did not indicate any pecuniary interest by the vice president.
2019: Opposition moves to smear Osinbajo in presidential pollProfessor Yemi Osinbajosuccession raceVice President
Share
Subscribe to our newsletter
Sign up here to get the latest news, updates and special offers delivered directly to your inbox.
You can unsubscribe at any time